Adjectives typically modify a noun and sit in the Noun Phrase: they fit the testframe [the very _______ N]

Adjectives can also sit in their own Adjective Phrase directly after the noun:

the parrot, green and shiny, made a noise

Note how the whole unit [green and shiny], an Adjective Phrase, can be transposed before the noun:

The [green and shiny] parrot made a noise

There are a few set phrases where the adjective always follows the noun:

Many adjectives can take comparative and superlative forms:

When analyzing Noun Phrases to identify the modifiers you will sometimes come across nouns which look like they are acting as adjectives – but which turn out not to be. Take horse chestnut, where horse modifies chestnut and tells us what sort of chestnut it is. However, the compound cannot take very: *the very horse chestnut; there is no comparative or superlative form: *the horsier chestnut; and the modifier cannot sit after the head noun: *the chestnut is horse. Horse chestnut is therefore best analysed as a compound noun. However, from the point of view of literary analysis it is usually enough to spot the modifiers and their placement, regardless of whether that modifier be an adjective or a noun. In what follows, all Noun Phrase modifiers will be coloured, and their status as adjective or noun will be noted only if relevant to the discussion.

Demonstration of adjectives in action

Read through the following passage and try to identify any adjective and noun modifiers, then click below to see them made explicit.

In the text below, the adjective and noun modifiers are shown in blue.

It was indeed a splendid road. It had been built by the natives, supervised by the Governor-General. He dreamt that on this beautiful road all Africa’s wealth, its gold and diamonds and diverse mineral resources, its food, its energies, its labours, its intelligence would be transported to his land, to enrich the lives of his people across the green ocean.

Deep in his happy sleep the Governor-General dreamt of taking the Golden Stool of the Ashante king, the thinking masks of Bamako, the storytelling rocks of Zimbabwe, the symphonic Victoria Falls, the shapely tusks of Luo elephants, the slumbering trees of immemorial forests, the languorous river Niger, the enduring pyramids of the Nile, all the deltas rich with oil, the mountains rifted with metals apocalyptic, the mines shimmering with gold, the ancestral hills of Kilimanjaro, the lexicon of African rituals, the uncharted hinterland of Africa’s unconquerable spirits. He dreamt of taking Africa’s timber-like men, their pomegranate women, their fertile sculpture, their plaintive songs, their spirit-worlds, their forest animals, their sorceries, their myths and their strong dances. He dreamt that the natives would transport all these resources tangible and intangible, on their heads, or on litters, walking on the great road, in an orderly single file, across the Atlantic Ocean, for three thousand miles. He dreamt of having all these riches transported to his land. Some of them would be locked up in air-conditioned basements, for the benefit of Africa, because Africans did not know how to make the best use of them, and because his people could protect them better. He dreamt of having them in the basement of a great museum, to be studied, and to aid, in some obscure way, the progress of the human race.

Click here to see the adjective and noun modifiers in the above text made explicit.

What effect do the adjective and noun modifiers have on the above text? Write your answer below:

The placement is usually [Adj + N], with some exceptions: resources tangible and intangible, where the Adjective Phrase postmodifies the noun; and the deltas (which were) rich, the mountains (which were) rifted, the mines (which were) shimmering. Here, the relative pronouns which link clauses together (which) and the verbs (were) have been elided (you will meet verbs and relative pronouns in later units). There are two postposed adjectives: Governor-General and metals apocalyptic. You may wonder why I have marked Ashante but not Atlantic. Atlantic Ocean is a Proper Noun (composed indeed of [Adj + N], deriving from Mount Atlas, on which the heavens were fabled to rest in Greek myth); the Noun Phrase [Ashante king] is not a Proper Noun.

Many of the modifiers in the Governor-General’s dream are ones which can only qualify animate beings, although in his dream they modify inanimate things: happy sleep, thinking masks, storytelling rocks, slumbering trees, fertile sculpture. By contrast, the humans in his dream are modified with inanimate nouns: timber(like) men and pomegranate women. The Governor-General is dreaming of something perverse (taking all the things from Africa and locking them up in a European basement), and his pairing of [animate modifier + inanimate noun] and [inanimate modifier + animate noun] mirrors this perversity.

In the text below, the adjective and noun modifiers are shown in blue.

Black shadows fell on the water, echoes of nothing poured down the hills and steamed over the lake. It began to rain; a Swiss downpour soaked the earth. The flat bulbous vines about the hotel windows bled torrents over the ledges; the heads of the dahlias bent with the storm.

“How can they have the fête in the rain?” the children cried in dismay.

“Perhaps the ballet will wear their ‘caoutchouc’ as we have done,” said Bonnie.

“I’d rather they had trained seals anyway,” said the little boy optimistically.

The rain was a slow sparkling leak from a lachrymose sun. The wooden platforms about the estrade were damp and soaked with dye from the wet serpentine and sticky masses of confetti. Fresh wet light through the red and orange mushrooms of shiny umbrellas glowed like a lamp store display; a fashionable audience glistened in bright cellophane slickers.

“What if it rains down his horn?” said Bonnie, as the orchestra appeared beneath the rain-washed set of chinchilla-like mountains.

“But it might be pretty,” protested the boy. “Sometimes in my bath when I sink beneath the water I make the most beautiful noises by blowing.”

“It is ravishing,” pronounced Genevra, “when my brother blows.”

The damp air flattened the music like a sponge; girls brushed the rain from their hats; the rolling back of the tarred canvas exposed the slick and dangerous boards.

“It is Prometheus they’re going to give,” said David, reading the programme.

“I will tell you the story afterwards.”

From a whirr of revolving leaps Lorenz collected his brown magnificence, clenching his fists in the air and chinning the mystery of the mountain sky. His bare rain-polished body tortured itself to inextricable postures, straightened, and dropped to the floor with the suspended float of falling paper.

“Look, Bonnie,” David called, “there’s an old friend of yours!”

Arienne, subduing a technical maze of insolent turns and arrogant twists, represented a pink cupid. Damp and unconvincing, she tenaciously gripped the superhuman exigencies of her role. The workman underneath the artist ground out her difficult interpretation.

David felt an overwhelming unexpected surge of pity for the girl going through all that while the spectators thought of how wet they were getting and how uncomfortable they were. The dancers, too, were thinking of the rain, and shivered a little through the bursting crescendo of the finale.

“I liked best the ones in black who fought themselves,” said Bonnie.

“Yes,” said the boy, “when they were bumping each other it was far best.”

Click here to see the adjective and noun modifiers in the above text made explicit.

What effect do the adjective and noun modifiers have on the above text? Write your answer below:

As with Ben Okri’s text, there are two tokens of [animate modifier + inanimate noun], insolent turns,arrogant twists, here serving to personify the danger of the dance in such slippery conditions. The adjectives fall into two main semantic groups, one to do with wet weather, and one to do with beauty:

The colours (black, red, orange, brown, pink) correlate with the second group. Although the ballet is a failure in that the audience and performers are soaked and neither group can concentrate, and Arienne’s dance is laboured; nevertheless the rain lends a not-aesthetically-unpleasing quality to the fête, and the children’s response is not negative. (That was a cumbersome sentence as piled-up negatives always are, but I’m trying to capture the seeing-something-good-in-a-dire-situation quality of the writing.) The sight of Arienne struggling under such adverse conditions provokes overwhelming emotion in David.

Adjectives are very common in literary writing. Because they qualify and modify nouns, paying attention to them can focus your attention on nuances of meaning. 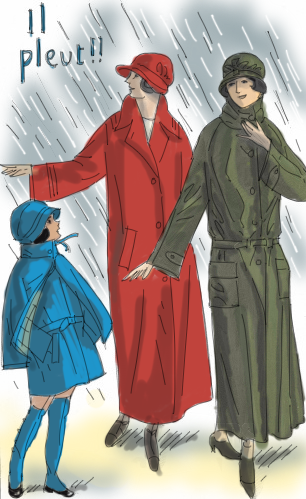