Certain verbs can cluster together, in which case the first one will be the finite auxiliary verb (remember, finite verbs are marked for person, number and tense), and the second, third, fourth and fifth will be –ed, –ing or base forms. In the following examples I have taken the main, or lexical, verb whistle and preceded it with various combinations of auxiliaries. I have marked the finite auxiliary verb in maroon, the –ed forms in light blue, the –ing forms in green, and the base forms in orange. (Remember, -ed forms aren’t always marked with –ed. Been is an –ed form but it is marked with –en.)

I would have whistled

I could have been whistling

I did not whistle

the tune was whistled by me

Auxiliary verbs are those verbs which can sit between the pronoun I and the final word in the sequence, the main lexical (or meaning-carrying) verb. The whole sequence of verbs is known as the Verb Phrase. Auxiliaries mostly consist of the forms of the verbs be, have, do, and what are known as the modal verbs (modal auxiliary verbs will be discussed in Unit 14 and there are nine central ones: would, will, should, shall, could, can, may, might, must). The word auxiliary ultimately comes from the Latin word auxilium, meaning ‘help’, and auxiliary verbs help the main or lexical verb by doing its tense-work (contrast I am whistling with I was whistling).

The last Verb Phrase in the sequence above, was whistled, is known as the passive. The passive consists of an auxiliary verb, or sequence of auxiliary verbs, plus an –ed form, and it can lack an agent: the tune was whistled. The agent sits in a following prepositional phrase: [by + agent]. Passives are useful for authors wishing to elide the agent of an action.

Auxiliary verbs are small frequent particles and their presence in literary texts is to be expected – as you see, they can stack up. Restriction to one type of construction alone, or their absence altogether, is probably more likely to warrant comment than a mixture of combinations.

Read through the following text, keeping a weather eye out for the auxiliary verbs have, be, do, and the modal auxiliaries, then click below to see them made explicit.

In the text below, finite auxiliary verbs have been marked in red, –ed forms in blue, –ing forms in green, and base forms in orange.

When I was bathed and in pyjamas and dressing-gown by the imitation logs that glowed so rosily on the hearth in my room, I said: ‘Mummy, who will have Mr Mellon’s snuff-boxes when he dies?’

My mother frowned a little.

‘We don’t want to think about people dying.’

‘But I want to know,’ I persisted.

My mother seemed to be wondering whether to tell me something or not.

‘Has Phyllis explained that Mr Mellon is going to adopt her?’ she asked, lifting her eyebrows.

‘No, Phyllis says hardly anything at all.’ Then the full meaning of my mother’s words came to me and I added excitedly, ‘Will she have the snuff-boxes and everything then?’

‘I expect so, darling, but it won’t be for a long time, so don’t talk about it or think about it any more.’

But once in bed, with the lights out, I thought of nothing else. It seemed to me the greatest waste that Phyllis should have anything more than the necessities of life; then my imagination was caught by the wonderful change in her fortunes; for, without having heard a word on the subject, I pictured Mrs Slade and Phyllis in very difficult circumstances before they had come to Mr Mellon.

I must have been asleep for some hours when I was woken by soft bumping sounds and the murmur of voices. The noises frightened me and even after I had recognized one of the voices as Mrs Slade’s, I felt anxious. What could be happening? There was another gentle bump. Mrs Slade said: ‘There we are! Up at last!’ and I heard a sort of comfortable grunt from Mr Mellon.

I realized that she was wheeling him to bed. Could she have pulled him up the stairs alone? The stairs were shallow, but Mr Mellon would be very heavy and awkward in his wheel-chair. It did not seem possible for so small a woman.

Click here to see the auxiliary verbs in the above text made explicit.

Not all –ed, -ing and base forms are preceded by an auxiliary verb:

the imitation logs that glowed – contrast glowed with were glowing: glowed is a simple, one-element, past tense verb here.

We don’t want to think about people dying – the Verb Phrase consists of [auxiliary do + base form want], followed by [preposition to + base form think]. What about dying? This sits in a separate clause, and is known as a non-finite –ing clause (more on such –ing forms in Unit 21). There is no finite auxiliary verb sitting between people and dying. It could be paraphrased as We don’t want to think about people who are dying, where the Verb Phrase are dying consists of [auxiliary be + -ing].

My mother seemed to be wondering – some quasi-auxiliaries exist, quasi in the sense that they consist of a small cluster of words rather than a single verb. Here, [seemed] is the finite verb marked for person, number and tense, followed by [preposition to + base form + -ing form]. If you had analysed [seemed to be wondering] as an auxiliary followed by a base form and an –ing form, you would not be incorrect. The UCL internet grammar gives a short list of quasi-auxiliary verbs.

If you have learnt a foreign language you may be wondering why terminology such as imperfect and pluperfect is not used. There are several reasons. Such terminology was not invented for describing English, and does not always fit the English language very well. Secondly, -ed forms and –ing forms are transparent terms: you don’t have to remember what they mean as they show you. Thirdly, nouns and verbs are surprisingly fuzzy in use. Speakers don’t actually speak in sentences much of the time, and using a term like imperfect would commit you as having analysed a sequence as a Verb Phrase, whereas in reality it might be ambiguous.

Despite the various combinations of auxiliary verbs with –ed, -ing and base forms, this text is not hard to process and speakers have no trouble at all in putting their auxiliary verbs in sequence.

In the text below, finite auxiliary verbs have been marked in red, –ed forms in blue, –ing forms in green, and base forms in orange.

Coming out from a lecture one evening, she said, they had found torrential rain, and Simon was the kind of man who never – in England, anyhow – went anywhere without an umbrella and a folded plastic raincoat.

Under the umbrella they had bolted towards the tube station – he and Martha splashing through puddles, past closed shops and open pubs.

“I got the umbrella, not Miss Smarty-boots. We sat in the train, dripping and steaming and shivering, and he put questions to me about the lecture that he’d been too shy to ask in front of the others. I realized that he knew a great, great deal more than I had imagined.”

The beef olives had been eaten, without, it seemed, making much impression. A pudding that followed was also a matter of indifference.

“He got off at Swiss Cottage,” Martha said. “After that we always went home together, whether it rained or not.”

She finished her pudding, absent-mindedly helped herself to more, and said, “I was starving.” After all that messing about Amy found this difficult to understand.

“One night we went to a pub, and the next week I asked him back to my room. We were slow movers. Do you know it was only the second time he had had sex with anyone, and he is twenty-seven. So sad. Wasn’t all that good at it, but neither am I. I only do it because I feel sorry for them.”

Click here to see the auxiliary verbs in the above text made explicit.

What effect do the auxiliary verbs have on the above text? Write your answer below:

This extract is a past-tense narration about a meal shared between Martha and Amy at which Martha recalls and relates events set further back in the past, when she met Simon. The Verb Phrases with auxiliary be and do (was starving, do you know) indicate the here-and-now timeframe of the meal, whereas the Verb Phrases with auxiliary have (had found, had bolted, ’d been, had imagined, had had) indicate a more distant past when Simon and Martha first got together. The exception is the three-element stack, the beef olives had been eaten (‘by Martha’ is implicit). This is a passive usage which could have been expressed actively: Martha had eaten the beef olives. Martha has been so intent on her narrative that she has failed to notice or praise her dinner, thereby annoying Amy, who regards Martha’s discourse as ‘all that messing about’. The passive enables the author to distance Martha from the act of eating and instead foreground her speech, even though whilst talking Martha has eaten all her dinner and two puddings, seemingly without gratitude.

Auxiliaries are small and frequent and easily overlooked – but watch out for the passive. Anything expressed passively could have been expressed actively, so question the stylistic effect. 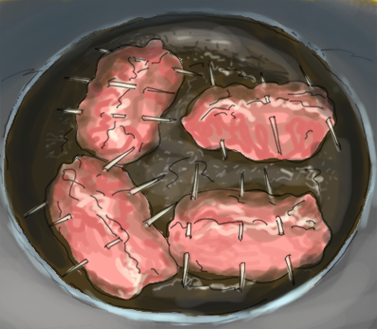