Definition of the term -ing forms

There are several kinds of -ing forms, which sit in both the Noun Phrase and the Verb Phrase:

Certain nouns were formed from verbs, and have fossilized in the –ing form: the railings, a building, a gathering, a helping, the stockings, a walloping

Certain adjectives have formed from verbs in the –ing form: a thundering wallop,a heaving sea, a flying ponytail, in a blinding flash, in the pouring rain, a freezing winter

An echoing gathering, groaning with nail-scrapingly excruciating wailing, was flailingly warbling from morning to evening – authors won’t usually stack up the –ing forms to quite this density, but as you can see, -ing is versatile.

You may know the –ing form when used in the verb phrase as a ‘present participle’. There’s nothing wrong with this, but linguists tend to prefer the term –ing form because the gradations between Verb Phrase use and Noun Phrase use can be fuzzy. Consider the gerund (a nouny kind of –ing form derived from a verb):

To John Curlow for digging a ditch - £10

This could be made more explicitly nouny, by preceding it with the definite article the:

To John Curlow for the digging of a ditch - £10

or less nouny, where like a verb it is followed by a direct object alone:

Notice that when sitting in the Verb Phrase, the –ing form is not marked for person, tense or number, and is therefore not finite. It is the auxiliary verb which carries these markers: I am singing, you are singing, we were singing. –ing forms can function as the verb in non-finite clauses: Singing loudly is fun; seeing is believing.

Demonstration of –ing forms in action

First read the text, then click below to see the uses of –ing forms made explicit:

The summer night descend with stars, they walking hand in hand, and Galahad feeling hearts.

‘It was a lovely evening –’ Daisy began.

‘Come and go in the yard,’ Galahad say.

‘The yard. Where I living.’

All this time he was stalling, because he feeling sort of shame to bring the girl in that old basement room, but if the date end in fiasco he know the boys would never finish giving him tone for spending all that money and not eating.

Daisy start to hesitate but he make haste and catch a number twelve, telling she that it all on the way home. When they hop off by the Water she was still getting on prim, but Galahad know was only grandcharge, and besides the old blood getting hot, so he walk Daisy brisk down the road, and she quiet as a mouse. They went down the basement steps and Galahad fumble for the key, and when he open the door a whiff of stale food and old clothes and dampness and dirt come out the door and he only waiting to hear what Daisy would say.

But she ain’t saying nothing, and he walk through the passage and open the door and put the light on.

Daisy sit down on the bed and Galahad say: ‘You want a cup of char?’ And without waiting for any answer he full the pot in the tap and put it on the ring and turn the gas on. He feel so excited that he had to light a cigarette, and he keep saying Take it easy to himself.

‘Is this your room?’ Daisy say, looking around and shifting about as if she restless.

Galahad throw a copy of Ebony to her and she begin to turn the pages.

With all the excitement Galahad taking off the good clothes carefully and slowly, putting the jacket and trousers on the hanger right away, and folding up the shirt and putting it in the drawer.

When the water was boiling he went to the cupboard and take out a packet of tea, and he shake some down in the pot.

Daisy look at him as if he mad.

He take the kettle off and rest it on a sheet of Daily Express on the ground. He bring two cups, a spoon, a bottle of milk and a packet of sugar.

They sit down there sipping the tea and talking.

‘You get that raise the foreman was promising you?’ Galahad ask, for something to say.

‘What did you say? You know it will take me some time to understand everything you say. The way you West Indians speak!’

‘What wrong with it?’ Galahad ask. ‘Is English we speaking.’

And so he coasting a little oldtalk until the tea finish, and afterwards he start to make one set of love to Daisy.

‘It was battle royal in that basement, man,’ he tell Moses afterwards, and he went on to give a lot of detail, though all of that is nothing to a old veteran like Moses, is only to Galahad is new because is the first time with a white number. Moses smile a knowing smile, a tired smile, and ‘Take it easy,’ he tell Sir Galahad.

Click here to see the uses of –ing forms in the above text made explicit.

You will have noticed that both Galahad and the narrator do use some Standard English tensed [aux V + –ing]: he was stalling, she was getting on, the water was boiling, the foreman was promising. Galahad has been living in his Bayswater bedsit for a while at this point, and both he and his narrator can switch into Standard English, and also use some more local London English forms (a lovely cuppa). (Selvon himself was a Londoner from Trinidad, and used Standard English in other publications.) Although at first sight there seem to be a lot of –ing forms in this text, most of them sit in the Verb Phrase and act as continuous past-tense usage. The text comprises a series of small domestic actions – entering the bedsit, taking off day-clothes, lighting the gas, making tea, talking, sipping – as Galahad, feeling hearts, leads up to his seduction of the complicit Daisy.

"Oldtalk": An Interview with Sam Selvon'

Analyse the –ing forms in the following text. First read the text, then click below to see the uses of –ing forms made explicit:

Bertie, looking in that evening, found her halfway through a bottle of Sancerre, calm in her white silk shirt and her patterned velvet skirt.

‘You must spend a fortune on that stuff,’ he said uneasily. ‘And it can’t be doing you any good.’ He hated evidence of solitary habits, just as he hated the echoing silence of the flat, as he stood outside wondering whether or not to use his old key.

‘Don’t worry,’ said Blanche. ‘I have never been drunk in my life. You do not run the risk of seeing me hanging round a lamppost with a riotous hat over one eye. I think you are frightened of my turning up at your house and making a scene. Bursting in on your guests while Mousie is dishing up the stuffed peppers. Having to be removed by men in white coats. Reduced to begging in the streets, asking passers-by for five pounds for a cup of tea. Yourself shuddering with disgust on the other side of the road. Anyway, I can afford it. That must be one worry off your mind.’

Bertie sat down in his usual chair with a slight sigh.

‘I hope I find you well,’ said Blanche, looking at him with an expression of some reserve.

Bertie appeared strange to her. Mousie insisted that in the evenings and at weekends he changed into clothes that broadcast messages of youth and leisure. He was like a child, Blanche thought. ‘In any case, I think it behoves lonely women to take on the burden of the world’s drinking,’ she said. ‘Curious verb, behoves. I behove, you behove. Or is it intransitive? You’ll find a bottle of Malaga in the larder,’ she added, seeing that, as usual, he was taking no notice. ‘Or there’s some Madeira, if you prefer it. With a sliver of Madeira cake, perhaps.’

Bertie ran a finger round where his collar ought to be. ‘Home-made?’ he enquired, remembering that he was wearing a polo-necked jersey.

‘Naturally,’ said Blanche, getting up and going out for the tray.

Click here to see the uses of –ing forms in the above text made explicit.

Why do you think the –ing forms were used? Write your answer below:

I have allocated the –ing forms according to whether they can more easily be preceded by the (the evening, the world’s drinking) or my (my making a scene, my bursting in), in which case they sit in the Noun Phrase; or by a verb (it can’t be doing, Mousie is dishing up), or by a clause (she added, seeing; he enquired, remembering), in which case they are Verb Phrase usages.

Blanche is not talking about factual matters anchored in the past, present or future. Rather, she’s empathising with Bertie, imagining that he’s worried about her being jealous of Mousie and expressing that jealousy in public. And then having said as much, she extends and elaborates the theme for six extra –ing forms (bursting, dishing, having, begging, asking, shuddering) (she also goes off at a tangent later when she ponders the word behove). The –ing form, being non-finite, conveys the non-factual, non-temporal aspect of her fantasy, which is only slimly based in reality. Blanche is not wittering, exactly, there is a logic to her progression, but the first two (seeing, hanging) conveyed her point; there was no need to continue. From seeing to shuddering, Blanche is not directly engaging with Bertie as he is in the here and now, but rather her projected view of how she and he might hypothetically behave, and so Bertie pays little attention. The phrase ‘as usual’ lets us know that Blanche habitually expresses her ideas to excess (she has ‘a fertile imagination’ in common parlance) and that Bertie habitually ignores them. –ing is a useful device for avoiding specifics.

There are several different kinds of –ing form, all common, and none of which are finite. It is usual for authors to use plenty of them, and by and large, they are not particularly noticeable. If you get a predominance of –ing forms, or one sort of –ing form only, then it’s worth asking why the author chose to put it/them there. 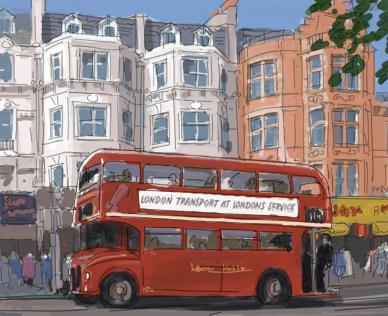