There are nine modal auxiliary verbs: shall, should, can, could, will, would, may, must, might. There are also quasi-modal auxiliary verbs: ought to, need to, has to. Why only quasi? Because the nine modals sit before the base form: I shall go, I could go, etc., but with ought/need/has we have to insert a to: I ought to go, it needs to be done, it has to be April (said at the onset of a shower, prompting inference).

The modal auxiliaries’ job is to express possibility (hypothesis, futurity, doubt) and necessity (by inference, such-and-such must necessarily be the case); that is, matters beyond the factual here and now. This is known as the irrealis. As we spend much time thinking and talking about the irrealis, modal auxiliaries are very common.

In the following extract, Nenna and Maurice are talking about a criminal, Harry, who stores his stolen goods on Maurice’s boat, which is also called Maurice. Pay attention to the modal and quasi-modal auxiliaries.

First read the text, then click below to see modal and quasi-modal verbs revealed:

In the text below, the modal verbs are marked in red, and the quasi-modals in blue.

During the small hours, tipsy Maurice became an oracle, ambiguous, wayward, but impressive. Even his voice changed a little. He told the sombre truths of the lighthearted, betraying in a casual hour what was never intended to be shown. If the tide was low the two of them watched the gleams on the foreshore, at half tide they heard the water chuckling, waiting to lift the boats, at flood tide they saw the river as a powerful god, bearded with the white foam of detergents, calling home the twenty-seven lost rivers of London, sighing as the night declined.

‘Maurice, ought I to go away?’

‘You said you were going to go away yourself.’

‘No-one believed it. You didn’t. What do the others think?’

‘They think your boat belongs to Harry.’

‘Nothing belongs to Harry, certainly all that stuff in the hold doesn’t. He finds it easier to live without property. As to Maurice, my godmother gave me the money to buy a bit of property when I left Southport.’

‘I’ve never been to Southport.’

‘It’s very nice. You take the train from the middle of Liverpool, and it’s the last station, right out by the seaside.’

‘Have you been back since?’

‘If Maurice belongs to you, why do you have to put up with Harry?’

‘What will you do if the police come?’

‘What will you do if your husband doesn’t?’

Nenna thought, I must take the opportunity to get things settled for me, even if it’s only by chance, like throwing straws into the current. She repeated –

‘Maurice, what shall I do?’

‘Well, have you been to see him yet?’

‘Not yet. But of course I ought to. As soon as I can find someone to stay with the girls, for a night or two if it’s necessary, I’m going to go. Thank you for making my mind up.’

‘Why should you think it’s a good thing to do? Why should it make you any happier? There isn’t one kind of happiness, there’s all kinds. Decision is torment for anyone with imagination. When you decide, you multiply the things you might have done and now never can. If there’s even one person who might be hurt by a decision, you should never make it. They tell you, make up your mind or it will be too late, but if it’s really too late, we should be grateful. You know very well that we’re two of the same kind, Nenna. It’s right for us to live where we do, between land and water. You, my dear, you’re half in love with your husband, then there’s Martha who’s half a child and half a girl, Richard who can’t give up being half in the Navy, Willis who’s half an artist and half a longshoreman, a cat who’s half alive and half dead... ’

He stopped before describing himself, if, indeed, he had been going to do so.

Click here to see modal and quasi-modal verbs in the above text revealed.

Nenna and Maurice are indecisive characters, and their inability to make decisions is conveyed by use of modal and quasi-modal auxiliaries (this is a dense concentration of modals for so short a text) and open-ended questions. When considering whether auxiliary have to is acting as a modal or not, see if it can be replaced by a modal. In context, Why do you have to put up with Harry? can be rewritten as Why must you put up with Harry?

Nenna and Maurice’s conversation is largely about the irrealis. Concrete facts are not discussed, other than a brief dismissal of Southport. Rather, they consider future actions, and voice opinion about decision-making. Notice the use of epistemic and deontic can:

Maurice, ought I to go away?

Is this use of can epistemic (possibility): ‘you are physically unable to leave your boat, you wouldn’t survive on land’, or is it deontic (obligation): ‘you shouldn’t leave because if you do I’ll be lonely without you’?

If Maurice belongs to you, why do you have to put up with Harry?

I can’t answer that.

Is this epistemic can (‘I am unable to answer that because I do not know the answer’) or deontic can (‘I have no intention of telling you that’)?

Richard who can’t give up being half in the Navy.

Similarly, is Richard unable or unwilling to give up being half in the Navy? These ambiguities are not resolved in the text and it’s not clear if either or both the speakers know themselves. Further, the tokens of should can be analysed to see if they express possibility, obligation, or whether they are ambiguous:

If there’s even one person who might be hurt by a decision, you should never make it.

Contrast it with the next token:

They tell you, make up your mind or it will be too late, but if it’s really too late, we should be grateful.

This sounds more forceful: ‘make up your mind or there will no longer be any possibility of doing so, but if it's really too late, we will be obliged (deontic) to be grateful’.

In literary texts, such ambiguity can be highly useful for authors as it allows multiple interpretations. Here, the overall effect of so many modals and quasi-modals is to keep the discussion in the irrealis, and to convey Nenna and Maurice’s ineffectual, and inconclusive thought-processes.

The extract below is from a play about estate agents trying to make sales. LEVENE, an estate agent, is pretending to be D. Ray Morton, an American Express executive and potential buyer, in order that ROMA, an estate agent, can evade LINGK, a client. They have set up the codeword Kenilworth as a cue to prompt a quick exit.

In the text below, the modal verbs are marked in red, and the quasi-modals in blue.

ROMA. Oh, God ... O, God ... (ROMA takes LINGK aside, sotto:) Jim, excuse me ...
Ray, I told you, who he is is the Senior Vice-President American Express.
His family owns thirty-two per ... Over the past years I’ve sold him ... I can’t tell
you the dollar amount, but quite a lot of land. I promised five weeks ago that I’d
go to the wife’s birthday party in Kenilworth tonight. (He sighs.) I have to go.
You understand. They treat me like a member of the family, so I have to go.
It’s funny, you know, you get a picture of the Corporation Type Company Man,
all business ... this man, no. We’ll go out to his home sometime. Let’s see. (He
checks his datebook.) Tomorrow. No. Tomorrow, I’m in L. A. ... Monday ...
I’ll take you to lunch, where would you like to go?

He starts for the door.

LINGK. My wife said I have to cancel the deal.

ROMA. It’s a common reaction, Jim. I’ll tell you what it is, and I know that that’s why
you married her. One of the reasons is prudence. It’s a sizeable investment.
One thinks twice ... it’s also something women have. It’s just a reaction to the
size of the investment. Monday, if you’d invite me for dinner again ...
(to LEVENE:) This woman can cook ...

ROMA. (to LINGK). We’re going to talk. I’m going to tell you something. Because
(Sotto:) there’s something about your acreage I want you to know. I can’t talk
about it now. I really shouldn’t. And, in fact, by law, I ... (he shrugs, resigned.)
The man next to you, he bought his lot at forty-two, he phoned to say that
he’d already had an offer ... (ROMA rubs his head.)

LEVENE. Rick, we really have to go.

LINGK. She called the Consumer ... the Attorney, I don’t know. The Attorney Gen ... they said we have three days ...

ROMA. Who did she call?

ROMA. Why did she do that, Jim?

LINGK. To change our minds.

Click here to see the modal auxiliaries in the above text made explicit.

At this point in the play, Roma is blustering. He uses will/shall (as they are usually represented on the page as ’ll, we can’t tell which) to talk about imaginary events in the future which he has no intention of fulfilling: meeting Lingk, talking to Lingk, calling Lingk, taking Lingk to lunch, taking Lingk to Ray’s house. He uses have to to indicate (fictional) social obligation (notice how the two tokens of I have to go and we really have to go are synonymous with I/We must go, unlike I’m sorry you had to come in). He exploits the ambiguity of deontic/epistemic can in I can’t tell you the dollar amount, which sounds deontic, as in ‘there are reasons why I’m obliged not to tell you’, but is really epistemic, as in ‘There is no possibility of my telling you because there is no dollar amount, the sale never happened’. He exploits deontic/epistemic can and should in there’s something about your acreage I want you to know. I can’t talk about it now. I really shouldn’t. And, in fact, by law, I ..., implying that he is unable to talk due some kind of legal embargo, when really he is unable to talk about Lingk’s acreage as there is nothing special about it to impart. The modals and quasi-modals convey the irrealis; there is nothing real about Roma’s lies.

Like auxiliary have, be and do, the modal auxiliaries are small and frequent and can get overlooked by readers. However the fact they can carry both deontic and epistemic meanings can be useful for authors wanting to create ambiguity. Modal auxiliaries convey the irrealis, and both in fiction and real life, speakers spend much time speculating about nonfactual events. 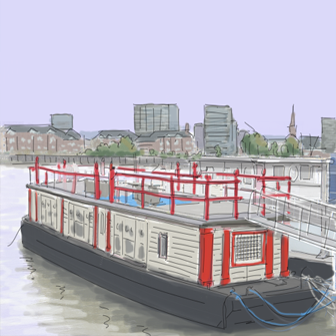