Personal pronouns are small words which can stand in for nouns:

The sun is shining. It is early Spring.

It refers anaphorically back to the sun and lets me avoid repetition. The personal pronouns used in Subject position (when they govern a verb) are:

When personal pronouns are used in Object position (when they are the recipient of the action of the verb) they change to:

When personal pronouns are used as Possessives, they change to:

e.g. These daffodils are ours but those ones are theirs.

Demonstration of Personal Pronouns in action

Read the following text and see if you can spot the pronouns, then click below to see them revealed:

In the text below, the personal pronouns are shown in blue.

The poets never lied when they praised

Even in this neat suburb

You can feel there’s something to

Something gentle, broadly nostalgic, is stirring

On the well-aired pavements.

Sighs, and you notice the sudden sharpness

The significance of what the houses

Click here to see the personal pronouns in the above text made explicit.

The poets never lied when they praised / Spring in England.

They refers anaphorically back to ‘the poets’. Notice the colloquial tone of never lied – never as a negator is present in all the regional dialects, as in “Did you steal my rubber?” “No I never!”, meaning “No I did not”, on this one occasion, as opposed to the Standard English sense of ‘on every occasion’. “The poets never lied” may be literal, i.e. they did not lie on each and every occasion they praised Spring, but this use of [never + V] cannot avoid sounding colloquial.

Even in this neat suburb / You can feel there’s something to / their pastorals.

Their refers back to the works of the poets praising Spring. But who is the you? Standard English has an impersonal third-person pronoun, one, but many speakers do not use it and find it slightly offensive. (You will know whether you avoid one and notice it each time you hear it, or whether you don’t really notice it, in which case you probably do have it in your idiolect.) One often sounds formal, and we’ve already seen that the tone of this poem is not formal. Speakers can avail themselves of you as an alternative for one. However, the poet might be addressing the reader at this point, suggesting that the reader also feels the aptness of the paeans to Spring in England, in which case you would be a second-person singular pronoun rather than a third-person singular one. I’m inclined to read it as a third-person usage, but whichever, use of you includes the reader to a greater (second-person) or lesser (third-person) degree, and maintains the non-formal tone. This move away from formal poetic language is continued with the elision there’s, with the colloquial idiom there’s something to (it), and also with the phrase neat suburb, the word suburb not usually occurring in canonical poetry.

Indrawn brick / Sighs, and you notice the sudden sharpness / Of things growing.

Or should we be interpreting you as a first-person pronoun? The verbs feel and notice are ‘interior state’ verbs (also known as ‘private’ verbs), that is, other people cannot know what someone else is feeling or noticing. The poet finds himself able to feel Spring in N.W.2, and to notice the sudden sharpness of things growing there. Like third-person usage, saying you to mean yourself is common in informal speech. The rather unpoetic tone continues (things growing, rather than a more florid description of the burgeoning greenery), and some more ambiguities: is the sharpness due to the clarity provided by the Spring sun low in the sky? What is indrawn brick and how does it sigh? My guess is that the brick which has been holding its breath all winter relaxes in the Spring sunshine.

The sun lightens / The significance of what the houses / Are steeped in, / Brightens out / Their winter brooding.

The diasporas, in the context of N.W.2, refer to the dispersal of the Jewish people around the globe, as Jews settled in that part of North London during and after the Second World War. England hardly mentions these cold diasporas, but the thoughts of the poet are with the scattered Jews: not in Israel, no longer in bourgeois Vienna or Salzburg or Cologne, nor in the ghettoes and shtetls of Central and Eastern Europe, but displaced from New York to New Zealand. A. C. Jacobs’ use of you encompasses first, second and third-person usage. As we read through the body of the poem most readers will, to some extent, enter into agreement with the poet, partly because of identifying ourselves with you, partly because of the colloquial tone, and perhaps because of also liking poems about Spring or Spring in a suburb. However, a subset of readers, those who are keen to disassociate themselves with Jews, will differ sharply at the end – despite having experienced the kinds of agreement mentioned, up to that point.

P.S. What is the significance of the layout? Is it reflecting the diagonal patterns of Flemish-bond brickwork?

The Poetry of A. C. Jacobs

In the text below, the personal pronouns are shown in blue.

In scorched summer light, from the circle of Charing Cross,

in a bargeman’s black greatcoat, clutching in one scrofulous


claw his brown paper manuscript. The nose, like a pharos,

bulbed from his cragged face, and the beard under it was

foam that exploded into the spray burst of eyebrows.


On the verge of collapse, the fallen sails of his trousers

were upheld by a rope. In the barges of different shoes

he flapped towards the National. The winch of his voice,


a fog still in its throat, barged through the queues

at the newspaper kiosks, then changed gears with the noise


from pigeon-stirred Trafalgar; it broke off the icing

from wedding-cake London. Gryphons on their ridge

of sandstone snarled because it had carried the cries in


the Isle of Dogs running over Westminster Bridge.

Today it would anchor in the stone waves of the entrance

of St. Martin-in-the-Fields. There, in tiered sunshine,


the black sail collapsed, face sunward with both hands

crossed over the shop-paper volume bound with grey twine.

He looked like a heap of slag-coal crusting the tiers


with their summering tourists. Eyes shut, the frayed lips

chewed the breeze, the beard curled like the dog’s ears

of his turned-down Odyssey, but Omeros was naming the ships


whose oars spidered soundlessly over the sun-webbed calm

behind his own lashes. Then, suddenly, a raging sparrow

of a church-warden bobbed down the steps. It picked one arm.


The bargeman huddled. It screeched. It yanked an elbow,

then kicked him with polished pumps, and a curse as

Greek to the choleric cleric as one might imagine


sprayed the spluttering soutane. It showed him the verses

framed at the entrance announcing this Sunday’s lesson

in charity, etc. Then, like a dromedary, over the sands


of the scorching pavement, the hump began to press on

back to the river. The sparrow, rubbing both hands,

nodded, and chirruped up the steps back to its sanctuary,


where, dipping one claw in the font, it vanished inside

the webbed stone. The bargeman tacked towards his estuary

of light. It was summer. London rustled with pride.

Click here to see the personal pronouns in the above text made explicit.

How do the personal pronouns contribute to your interpretation of the work? Write your answer below: 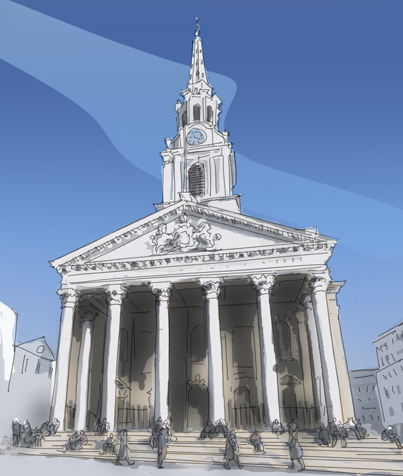 He, the bargeman, Omeros, emerges from the underground at Charing Cross, walks towards the National Gallery, and lies down on the steps of St Martin-in-the-Fields which is tiered like a wedding cake. He is singing or talking or shouting as he walks, the winch (of his voice) barging through queues, changing gear, breaking off stonework (the icing), being snarled at by sandstone Gryphons, and finally anchoring on the steps of St Martin-in-the-Fields. There, as he dozes, a raging sparrow (of a churchwarden) picks his arm, screeches, yanks his elbow, kicks him, shows him the notices at the entrance, and then when Omeros leaves, goes back inside. What one might expect to be the head noun of the Noun Phrase (voice, churchwarden) postmodifies other nouns (winch, sparrow), and it is the head nouns winch and sparrow that are trailed by anaphoric pronouns. This causes a clash between human/non-human referents: a churchwarden would normally be referred to as he, but a sparrow as it. There is a further clash with possessive his (his estuary of light), humans not normally owning estuaries, nor estuaries being of light. The final it in the last line is known as ‘dummy it’. English has two dummy forms, it and there, also known as ‘existential there/it’. They are subject place-holders and have no semantic content.

The metaphor for Omeros is of the watery world of ships and shipping. The action is of a tramp walking along one side of Trafalgar Square and being removed from the church steps by a churchwarden. The churchwarden is ornithomorphised as a sparrow, a land bird (sparrows used to be associated with London although few now remain). The social hierarchy (churchwarden = high, tramp = low) is reversed by the pronouns (tramp = he, sparrow = it). Although we hear the poem through the voice of the narrator, the narrator is on Omeros’s side.

Although pronouns form what linguists call a ‘closed class’, that is, one can’t invent more, speakers and writers can use pronouns in multiple and versatile ways. You and we are particularly malleable (in a given context, does we mean ‘you, me and everyone else’, or ‘you and me’ as opposed to all the others?). 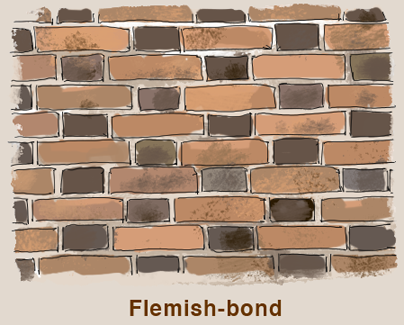