Reviewed in This Issue

This issue of The Spenser Review, the penultimate one we will oversee, contains a wide variety of important and challenging material. Read more…

In the history that maps the connection between Elizabethan English and its continental cousins, a history in which English and English verse is conventionally understood to be little known on the continent, the influence and authority of first Italian and then French poetry among the English is regarded as an unexceptional commonplace, if aided now with a more detailed history of the role of neo-Latin verse in this arena. Read more…

In 1598, Irish rebels under the forces of Hugh O’Neill drove out the English colonists from County Cork, burning and plundering their belongings. Among the structural casualties of this campaign was Edmund Spenser’s personal library at Kilcolman Castle, and its ruin is perhaps a large part of why so few of Spenser’s books survive today. Of the few volumes previously owned by Spenser that do survive, it is significant that one of them is a collection of Neo-Latin poetry. Read more…

Recent developments in the study of Renaissance Ireland, including the study of Spenser’s Irish context, have seen efforts to engage more fully with the parallel literary tradition of Gaelic Ireland. These efforts, however, are the exception rather than the rule, and reference to Irish language literature is still all too rare and peripheral. Read more…

Playing the Porter in The Faerie Queene Katherine Blankenau

As many critics have noted, Ben Jonson’s influential country house poem ‘To Penshurst’ concludes with an allusion to Spenser. Jonson praises the Sidney estate in comparison to architecturally grander, more decorative prodigy houses, which he disparages as ‘proud, ambitious heaps’. The words recall the phrase Spenser uses to sum up his description of the House of Pride: ‘It was a goodly heape for to behould’. Read more…

In an essay on the idea of the sacred building, Lukas Feireiss asserts that it is ‘permissible to speak of a language of religious architecture’. Sacred buildings, for Feireiss, ought to communicate through symbolism: their ‘language’ is a set of ‘constructed symbols of the content they embody’. Read more…

In the Epistle Dedicatory to the Shepheardes Calender, ‘E.K.’ praises Spenser’s ‘dewe obseruing of Decorum euerye where, in personages, in seasons, in matter, in speach, and generally in al seemely simplycitie of handeling his matter, and framing his words’. Read more… 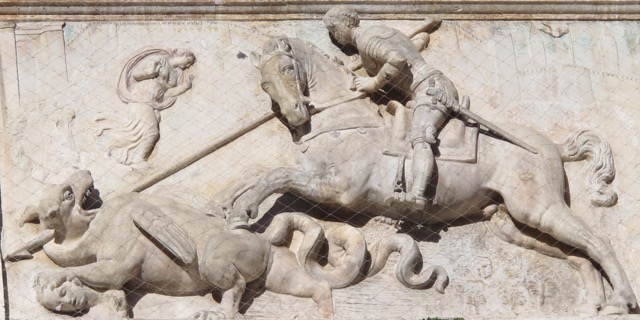 Bas relief from the exterior of the Scuola San Giorgio degli Schiavoni in Venice. Photo courtesy of Roger Kuin.