This is a resource firmly rooted in place. The Map of Early Modern London (MoEML) recreates sixteenth- and seventeenth-century London with all its churches, markets, bookshops, neighborhoods, gates and halls, and it does so with a large and detailed contemporaneous map combined with primary source materials describing or depicting London at the time. Further exploration and research are enabled through innumerable opportunities to contribute and open availability of articles, images, and data produced for the project. MoEML captures the best of digital humanities in its commitment to open access and open source technologies, producing an online resource that, thus far, is both scholarly and engaging to all levels of users.

Based on the so-called Agas map of London and originally envisioned as a digital atlas, MoEML has expanded in the content available as well as its purpose over its ten years online. MoEML includes, in addition to the fascinating centerpiece map, accommodation for an encyclopedia; a gazetteer of places, people, topics and terms; and a collection of selected texts pertaining to London places—in particular the surveys of John Stow—transcribed, TEI-encoded, and marked for references to people, places and dates (Figure 1). These resources are linked and cross-referenced throughout; for instance, the encyclopedia article on St. Paul’s Cathedral includes links out to every MoEML document containing mention of St. Paul’s, from, for instance, a 1608 poem noting “Paul’s steeple” to an article about its reputation as a place for gossiping at the time, as well as all the variant spellings and names found therein, e.g. “Church of bleſſed Paule,” from Chruſo-thriambos, a 1611 Lord Mayor’s Show text that can be viewed in MoEML. Because content is collaboratively–authored and still growing, it is sparse in areas, but a well-designed structure is in place. The project relies on open content—for articles, entries, and for transcriptions—to be created and contributed by qualified users and students, and this pedagogical aim, as much as the resource it will lead to, seems to be at the heart of the project.

The map selected as the point of reference for MoEML could not have been better chosen. The Civitas Londinum, termed the “Agas map,” is a bird’s-eye view of London first printed from woodblocks ca.1561-62 and later modified in the early seventeenth century, as is the case with this 1633 copy from the London Metropolitan Archives. From the mid-sixteenth century, mapping was just becoming a familiar and accessible format amongst the educated in England, with inexpensive prints, produced in multiple sheets, becoming available widely. The Agas map is, along with one other map based on the same precedent, the best surviving depiction of the geography of pre-fire London. It illustrates all of the gates and buildings, the streets are labeled, and rustic features such cows at pasture in Covent Garden and windmills in Shoreditch are reminders of the relatively limited geographic extent of early modern London. It serves well MoEML’s broad sixteenth- and seventeenth-century focus; the version of the map depicted is a blend of the 1633 updates with hints of the original 1553-59 survey undertaken for the now-lost map upon which this was modeled.

The Geographic Information System technologies allow interaction with the map in an altogether new way. Once the constituent map prints were  scanned in high resolution and joined into a single image,  individual features of note were digitally redrawn, identified and classified, largely with the aid of the The A-Z of Elizabethan London, which reproduced and indexed the Agas map in book form in 1979. The latter had been the most straightforward and accessible source for mapping of Elizabethan London, but the MoEML augments pure identification with a vast amount of linked information: geocoded references to primary sources, original encyclopedia articles, indices, map classifications, gazetteer databases, transcriptions, and other resources. Patterns of urban geography and land use, immediately apparent visually, inspire curiosity, questions, and interest. Why is the Cooks’ Hall outside the city walls when the other 46 trade companies are all within? (Figure 2) Why are the bear and bull baiting rings so like theaters, and so separate from the city? Were most river crossings by ferrymen? The map provides an interactive entrée into exploring MoEML’s many resources. Response times are fast all around, for viewing and interacting with the numerous layers and for performing functions such as adding shapes, capturing URLs, and saving views of the map as separate images. Though further functionality is planned, the relatively simple functions now available will be useful for teaching and visualizing the places, distances, and layout of early modern London.

Most of the Encyclopedia articles are as yet unwritten, but will be primarily about places and topics. The project relies on contributions, and while some entries have been assigned to volunteers, a majority have not. Quality of the articles can vary, but they are are often outstanding, thoroughly researched, well-written, and readable as appropriate to an encyclopedia entry, with citations, references, and often graphics. An indication of the class of the contributing author is provided, e.g. undergraduate student, pedagogical partner, graduate student, etc., and peer-reviewed status is noted. Though some topics are general, e.g. “The Great Fire of London,” others are more specialized, such as “The Sounds of Pageantry,” a Scholarly Contribution that describes the sensory experience of London’s processionals, shows, and formal events. Other areas in the encyclopedia, such as the Personography, do not use original articles, and link out to external web resources, or offer lists, as in the case of the References and Glossary.

The goal of MoEML is to mine as many primary sources as possible for information and accounts of London places during the sixteenth and seventeenth centuries, with less focus on the source materials as artifacts. The “Library” segment at present contains approximately 50 early modern encoded texts and extracts of dramatic works. These were selected from Early English Books Online (EEBO) or EEBO’s Text Creation Partnership, with priority given to those containing large numbers of references to London place names, e.g., streets and sites. Diplomatic transcriptions, which record characters on the page exactly with no editorial changes or corrections of any kind, even preserving the layout of the page, were created from the scans of original texts. These TEI-encoded transcriptions offer a tremendous advantage for scholars wishing to find, manipulate and reuse original content digitally without restriction, and numerous xml versions are made available for download, adding to the usefulness of the output. Modernized versions of the texts, valuable for non-specialists, are available for very few titles. Surprisingly, there are no proper citations of the original works in the Library, but only a table with brief title, author, and year. Viewing full citations of the source volumes used for the transcriptions, or scans of the original documents, requires access to the subscription-based EEBO; though this will be due to licensing restrictions and/or project scope limitations, it will disappoint some scholars and bibliographers.

Another segment of the project will offer TEI-encoded diplomatic transcriptions of John Stow’s Survey of London, starting with the 1598 edition, to be followed by the 1603, 1618, and 1633 editions. None are online as yet, but, true to the project in general, documentation of the plans and methodology is available.

A notable feature throughout MoEML is thorough documentation, and the volume and quality of information about the project history, future plans and directions for development, and research and presentations is remarkable, revealing an impressive infrastructure and a firm grasp of the standards, technologies, and aims of digital humanities projects. There is a tremendous amount of information on ways to contribute as an individual scholar or in a pedagogical setting, whereby faculty commit student course time to producing research articles or technical input, and are supplied with teaching materials and detailed  guidance on encoding text, geocoding place names, or transcribing. Every contributor and their role is named in what is essentially a crowdsourcing model, if a selective, focused and research-driven one. The areas in which MoEML is currently lacking, i.e. breadth or depth in the Library and dearth of completed articles, reflects only the hard truth of all projects of this type: relying on user contributions, however qualified those users are, means that production can be unpredictable and progress may be slow, if steady. .With digital scholarship methods becoming more familiar, recognized, and appreciated throughout academe, such high-quality, well-fashioned projects will be in demand, and content for MoEML will grow at a steady and sure rate. 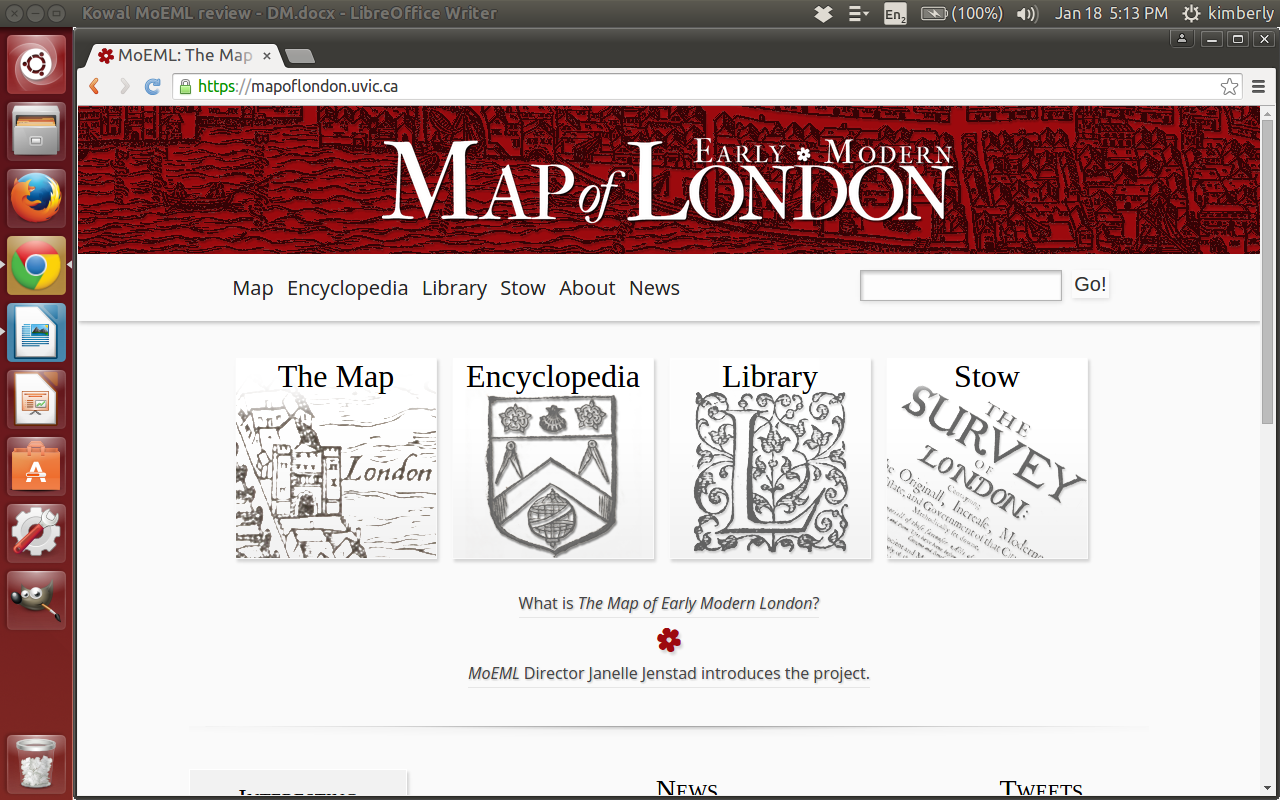 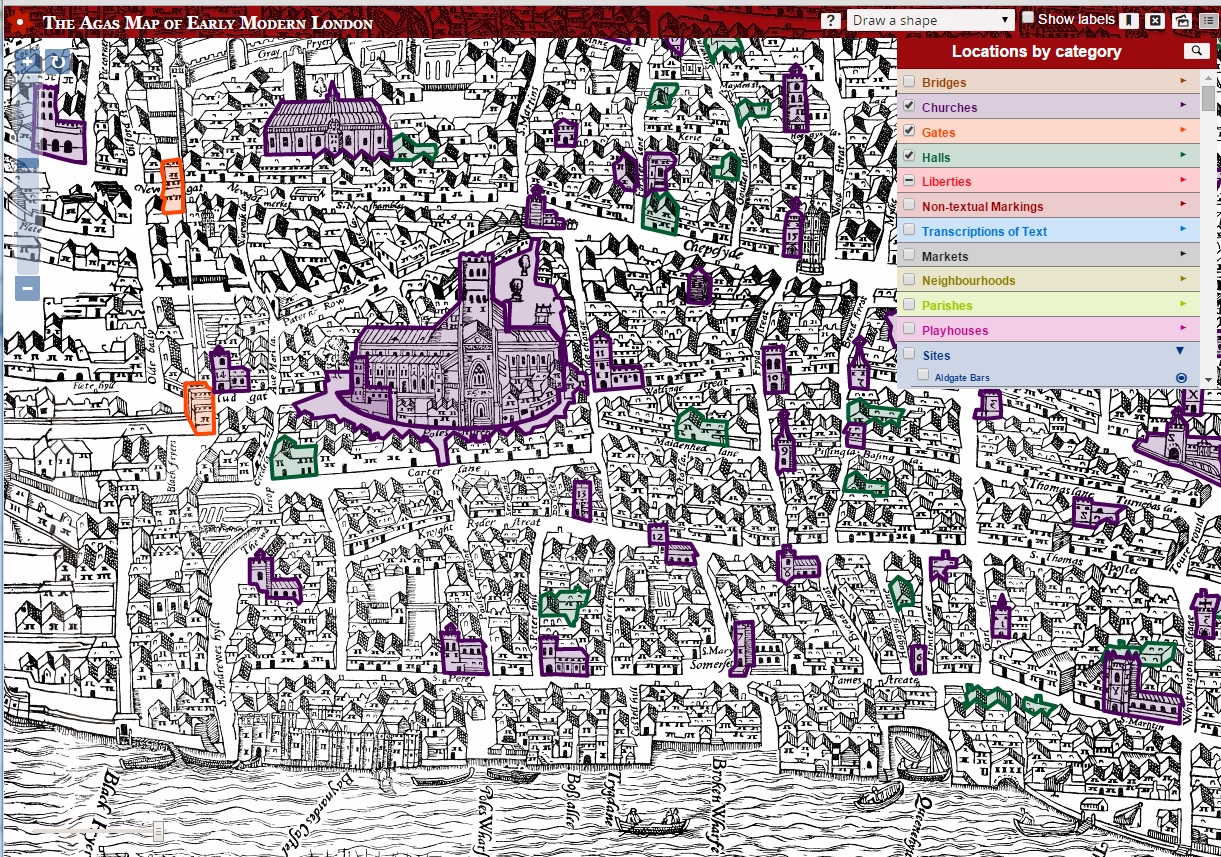 MoEML Agas map interface, with Halls, Churches, and Gates highlighted. Each identified element on the map links out to articles, contemporaneous texts, and other resources. Click here to see the full interactive version of this map.