We warmly invite you to apply for the MPhil in English Studies and to become part of the Cambridge medievalist community. Read on to find out what we offer.

What the MPhil offers you

You can specialise in medieval literature as part of the MPhil in English Studies at the Faculty of English here in Cambridge University. The MPhil includes opportunities for rigorous training in medieval manuscript studies, in a university with world-class resources for research in both manuscripts and early print, and specialists in various aspects of these fields. This is complimented by specialist research-led courses in medieval literature and culture, allowing you to engage with the very latest critical approaches and to tailor your studies to your own research interests. These will vary each year, but recent and proposed courses include The Literature and Culture of East Anglia and Beyond, Transgressive Sexualities, Books in the Digital Age, Middle English Contemplation: Affect, Apophasis, Aporia and Reading Forbidden Books.

The programme also includes ‘Research Framework’ courses that focus on central theoretical problems across fields of literary study, run by scholars from across the Faculty who are involved in these debates; these will include ‘Poetry and Poetics’, ‘Politics and Culture: Capitalism, Ecology, Decolonisation’, ‘Material Texts’, ‘Literature and Philosophy’, ‘Narrative and its Mediations’, and ‘Bodies, Performance, Gender’.  You can also engage in interdisciplinary work, both within the Faculty and by attending seminars at other Faculties. This combination will equip you to develop your own distinctive historical, geographical, critical and theoretical interests.

It’s an exciting free-standing course for anyone interested in medieval literature and culture, but also provides an excellent basis for doctoral research. It will especially appeal to aspiring lectures wanting to specialise in medieval literature while gaining a broader understanding of the discipline they are entering. Graduates of the PhD in medieval English here in Cambridge have gone on to academic posts in the UK, continental Europe, North America, and China.

For full details of the MPhil in English Studies and how to apply, click here. 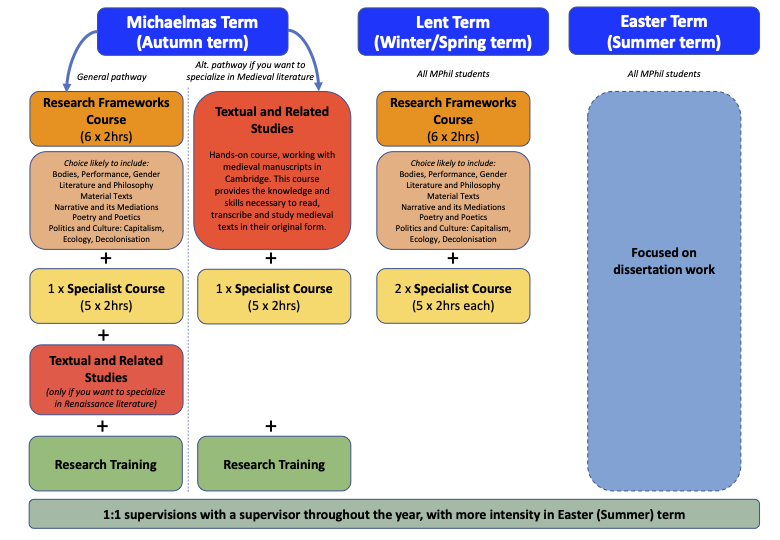 Opportunities to specialise within the MPhil in English Studies

Our vision of medieval studies within the MPhil

Our ambition is to offer a far-reaching course which allows students to engage in critical and conceptual thinking and study of the material text. Current medievalists in the Faculty of English are all in different ways committed to practices of careful reading, interpretative and theoretical innovation, and rigorous research. At the same time, our teaching and research in the literature and culture of the Middle Ages are more diverse than ever: they include studies in multilingualism, the wider geographies of the Middle Ages, the history of thought and science, the body, gender and identity, the material and visual artefact, manuscripts and the history of the book. The Cambridge community of medievalists is a vibrant one and, at lectures and research seminars, not least the fortnightly research seminar in the Faculty of English, there are opportunities to meet medievalists both from the Faculty and elsewhere in the University.

We all combine historical, critical and theoretical approaches to medieval writing in different ways. Providing we can supervise it, we will consider any proposal for a dissertation project falling within the general field of Medieval English studies very broadly defined, from 1066-c.1550. The opportunity to pursue your individual research project under the guidance of an expert supervisor is one of the high points of the course.

Who will teach you:

You will be taught both in seminars and in one-on-one supervision, by a team of scholars of international standing, whose work ranges from 1100 to 1550.

Jessica Berenbeim specialises in the role of visual culture in documentation, historical knowledge, and political power. She has particular interests in the aesthetics and materiality of writing; museum studies, archives, and archival theory; philosophy of history; inscriptions; medieval art and architecture; classical reception studies; history of the book; and medieval cultural history.

Orietta Da Rold is interested in handwritten books and documents and their making, specialising in the social and cultural context of the circulation and transmission of texts between ca. 1100-1500, Chaucer and the digital humanities.

Philip Knox specialises in the relationship between medieval English literature and European literature (especially Chaucer, Gower, Langland, the Gawain-poet and the influence of the Romance of the Rose), the interaction of literature and intellectual culture, medieval lyric and narrative.

Jaqueline Tasioulas  supervises on the late medieval period in both English and Scots. She has particular interests in Chaucer, the Makars, and on the interplay of theology and science in medieval literature.

Medievalists who have gone before you:

Medieval studies at Cambridge go back to the nineteenth century with the pioneering manuscript experts Henry Bradshaw and M.R. James, the Chaucer and Piers Plowman editor W.W. Skeat, and the many early scholars of Old English and related languages. The influential palaeographer A. I. Doyle was a graduate of the English Faculty. Their work has been continued in recent times at Cambridge with the palaeographical scholarship of Richard Beadle, Barry Windeatt’s important critical editions of Chaucer and contemplative writing, and ongoing work in the department of Anglo Saxon, Norse and Celtic, separate but situated within the Faculty of English. A crucial turning point in Middle English critical studies at Cambridge was 1954, when C.S. Lewis took up the new professorship of Medieval and Renaissance English. Other major twentieth-century scholars and critics of Middle English here were Derek Brewer, who specialised in Chaucer and romance studies, and founded the publisher Boydell and Brewer; Elizabeth Salter, who went on to found the York Centre for Medieval Studies; A.C. Spearing, an exponent of close reading and innovative theorist; and Jill Mann, author of many influential critical works and expert in Latin literature, especially beast fable and epic. Medievalists who have taught here more recently include James Simpson, a literary, political and cultural critic of the medieval and early modern periods; Christopher Cannon, the author of books on Middle English language, grammatical culture and Chaucer; Helen Cooper, an expert in Chaucer, medieval romance and Shakespeare; and Christopher Page, whose musicological scholarship continued a strand of studies in medieval literature and music that began here with John Stevens. All these scholar-critics participated in a distinctive Cambridge school of medievalism, pursuing the conviction that, through practices of close reading, deep scholarship and interdisciplinarity, medieval literature has much to say to modern readers.

Recent and forthcoming books by current Faculty members include: