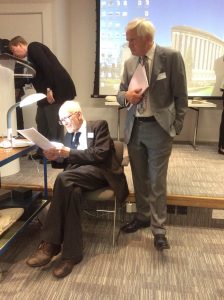 n the 22nd of September, as Cambridge’s new intake of Medieval MPhil students, we were offered the opportunity to attend a symposium marking the retirement of Professor Richard Beadle.

Part of the ‘Writing Britain’ conference series, the theme for the day was ‘Textual and Related Studies,’ after a course of the same name initiated by Professor Beadle. The event was split between the Faculty of English and the University Library. Papers were given by twelve speakers, but of course the event drew wide attendance from the scholarly community, with about fifty colleagues and friends of Professor Beadle in attendance.

Subjects ranged from ‘The pragmatics of punctuation: three Anglophone letters from Wales’ (Jeremy Smith) to ‘Producing an English Bible c.1400’ (Anne Hudson.) Many of the presentations touched directly on Professor Beadle’s own work, while one was even given by a former student of his, Nicholas Perkins. For a full list of the speakers and their papers, see below.

Individual reflections:
Fran D’Argenio: As a new member of the medieval academic community, I was excited and pleasantly overwhelmed by the breadth of scope within the symposium. Jeremy Smith’s paper in particular was amusing and interesting as he examined three somewhat acrimonious letters for their punctuation, as well as Meg Twycross’ that gave a warm and funny insight into the academic process.

Katherine Dixon: Aside from the remarkable quality of the papers presented at Professor Beadle’s symposium, the most memorable part of the day for me was by far the tangible excitement it created among the newly arrived MPhil students. Surrounded by generations of Richard’s colleagues and students one couldn’t help feeling wholly validated in their choice to enter into the wise, generous and engaging medieval academic community.

Laurie Atkinson: Now some weeks into the eponymous ‘Textual and Related Studies’ course, I have come to more fully appreciate the great treasury of manuscript material to which Richard has introduced so many through his teaching and scholarship. The gratitude of students and colleagues for his many contributions to the field was expressed though the scholarly enthusiasm, and genuine personal warmth so evident throughout the symposium. It was an atmosphere extremely welcoming to the master and the as-yet-uninitiated alike, and an introduction to a community to which I sincerely hope to contribute in the future.

Hannah Lucas: All of the new MPhil students were so grateful to be welcomed to the academic community with the invitation to such an event. To hear of the development of Professor Beadle’s Textual and Related Studies course, which remains integral to the postgraduate experience, was a wonderful opportunity. The symposium presented wide-ranging scholarship that stretched even into the 20th century, in the case of Anne Hudson’s illuminating talk, and reiterated the multifarious and far-reaching nature of the field of medieval studies.

Anni Henriksen: The symposium, a day of academic celebration among colleagues, advisors and students, mentors and mentees, was first and foremost a celebration amongst friends. Having arrived in Cambridge only days prior to the event, some of us were yet to learn the full magnitude of Professor Beadle’s exceptional career. However, after five hours in the company of Professor Beadle himself and many of his remarkable colleagues present that day, we had gained a clear sense not only of his immense generosity in teaching and collegiality in research, but also the breadth of his knowledge and contribution to the many fields of study within medieval literature and manuscript studies.