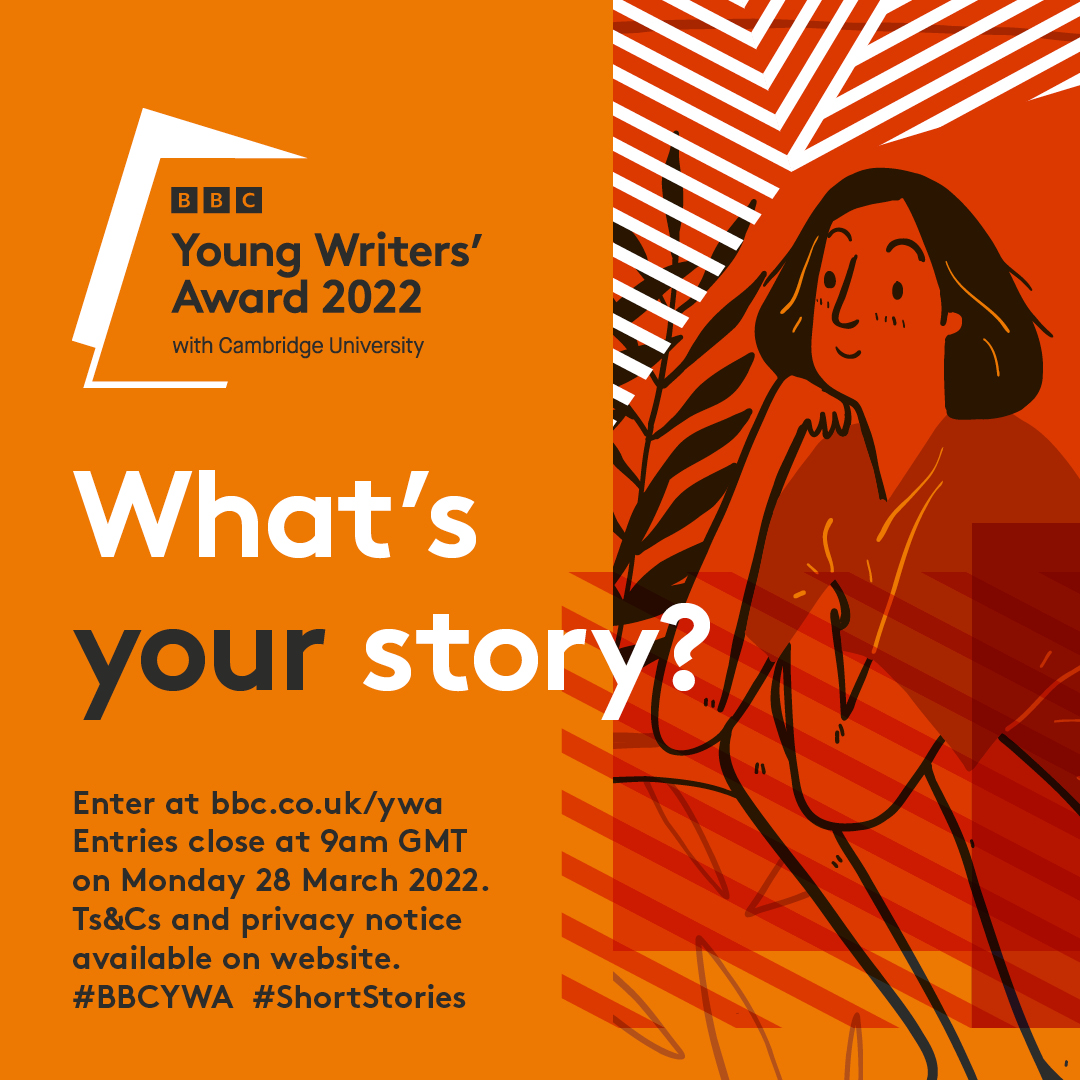 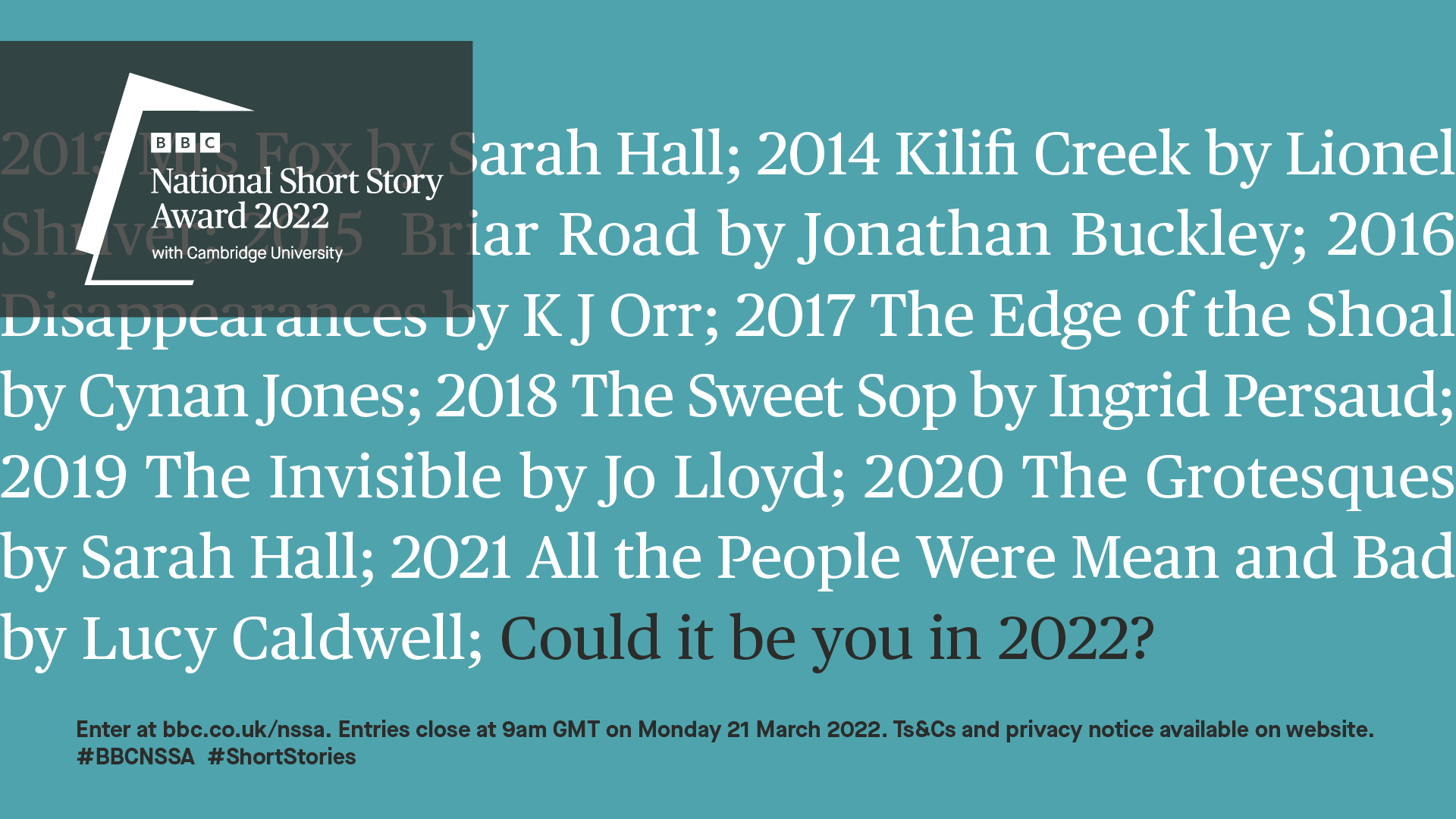 The BBC National Short Story Award with Cambridge University (NSSA) and BBC Young Writers’ Award with Cambridge University (YWA) open for submissions at 9am on Thursday 13th January 2022 with award-winning novelist, journalist and broadcaster Elizabeth Day chairing the judging panel for the BBC NSSA, an award that has enriched both the careers of writers and the wider literary landscape since its launch seventeen years ago.

Elizabeth Day, Chair of the 2022 BBC National Short Story Award Judging Panel, says:
“I’m so delighted and honoured to be the chair of this year’s BBC National Short Story Award with Cambridge University. As a novelist who has occasionally dabbled in short stories, I know only too well how challenging the form can be. The best short story writers combine an economy of expression with a breadth of vision that leaves an indelible impression on the reader, and in this category I’d include the work of George Saunders, Jhumpa Lahiri, Chimamanda Ngozi Adichie, Julian Barnes, Jon McGregor, Helen Simpson and of course the late, great Raymond Carver. I’m so excited about immersing myself in the submissions and seeing what today’s short story writers have to say. I’m looking forward to being moved, entertained and provoked – and for the story itself to live on in my mind long after the final page has been turned. For me, the power of a brilliant short story resonates far beyond its word count.”

BBC Radio 1 Presenter Katie Thistleton is Chair of the BBC Young Writers’ Award with Cambridge University (YWA). She returns to the judging panel for the teenage award for the fifth time as it opens for submissions for the eighth year. Katie is a writer and the co-host of Radio 1’s Life Hacks and The Official Chart: First Look on Radio 1. The BBC Young Writers’ Award is open to writers between the ages of 14-18 years.

Katie Thistleton, Chair of the 2022 BBC Young Writers’ Award Judging Panel, says :
“It’s brilliant to be back chairing the BBC Young Writers’ Award with Cambridge University. Discovering and celebrating new writing talent, seeing what young people want to say in their own unique way and giving them a voice, has become an annual highlight for me. Last year’s talented winner, Tabitha Rubens, had been shortlisted for the Award before and her success in 2021 was testament to the power of perseverance and the art of practice. However, it’s important to mention that this isn’t an Award for seasoned writers only. This competition is open to everyone and I’m eager to read submissions from young people who’ve never written a short story before. So go on, get writing – we can’t wait to hear from you.”

The BBC National Short Story Award is one of the most prestigious for a single short story, with the winning author receiving £15,000, and four further shortlisted authors £600 each. The stories are broadcast on Radio 4 and published in an anthology by Comma Press. The 2021 winner of the BBC National Short Story Award was Lucy Caldwell for ‘All the People Were Mean and Bad’, the intimate story of a woman navigating a long-haul transatlantic flight alone with her 21-month-old daughter after a family loss. It was third time lucky for Caldwell, following two previous nominations. Previous alumni of the award include Sarah Hall, Zadie Smith, Hilary Mantel, Jon McGregor, Ingrid Persaud, Cynan Jones and Jo Lloyd.

The writers shortlisted for the BBC Young Writers’ Award have their stories narrated by an actor and recorded for a BBC podcast and published in an anthology. The winner of the 2021 BBC Young Writers’ Award was Tabitha Rubens for her original and experimental story ‘Super-Powder’ written after the winter lockdown, which exposes modern society’s exploitation of insecurities for profit. Both winning stories are available to listen to on BBC Sounds.

Di Speirs, Editor of Books at BBC Radio and judge of the BBC National Short Story Award since its launch, says:
“As a new, and hopefully better, new year dawns, I’m excited and intrigued by what we’ll find from short story writers, old and new, in 2022. As one of the world’s leading commissioners and broadcasters of short fiction, the BBC has always known that short stories allow writers to look at life at a slant, to explore timely ideas, to travel in time or place, to escape or to embrace reality. In each of the seventeen years now that the BBC has supported short story writers through these awards, we have been surprised, heartened and thrilled by the entries in both awards and by the light they throw on our shared experience. I can’t wait to spend the spring immersed in fine fiction, seeking out the very best stories to be broadcast to our listeners in the autumn.”

This is the second year of a three-year partnership with Cambridge University and the Fitzwilliam Museum.

Dr Bonnie Lander Johnson, Fellow, Tutor and Director of Studies in English, Newnham College, Cambridge University, adds:
“The short story continues to capture our lives in surprising ways: it is a form that adapts with a changing world. Cambridge is a major centre for scholarship on prose fiction and its relationship to culture and history. We look forward to seeing what the young and adult writers reveal to us about our lives over the past year.”Full ‘Terms and Conditions’ for the NSSA and YWA are available with submissions accepted online at www.bbc.co.uk/nssa and www.bbc.co.uk/ywa from 9am Thursday 13th January 2022.

• SHORTLIST BROADCAST: The stories shortlisted for the BBC National Short Story Award with Cambridge University will be broadcast on BBC Radio 4 from Monday 19th to Friday 23rd September 2022, subject to change.

• WINNER ANNOUNCEMENT: The announcement of the winners of the two awards will be broadcasted live from the award ceremony at BBC Broadcasting House on BBC Radio 4’s Front Row from 7.15pm on Tuesday 4th October 2022.