Glenn Ligon’s Rückenfigur (2009) at the Whitney 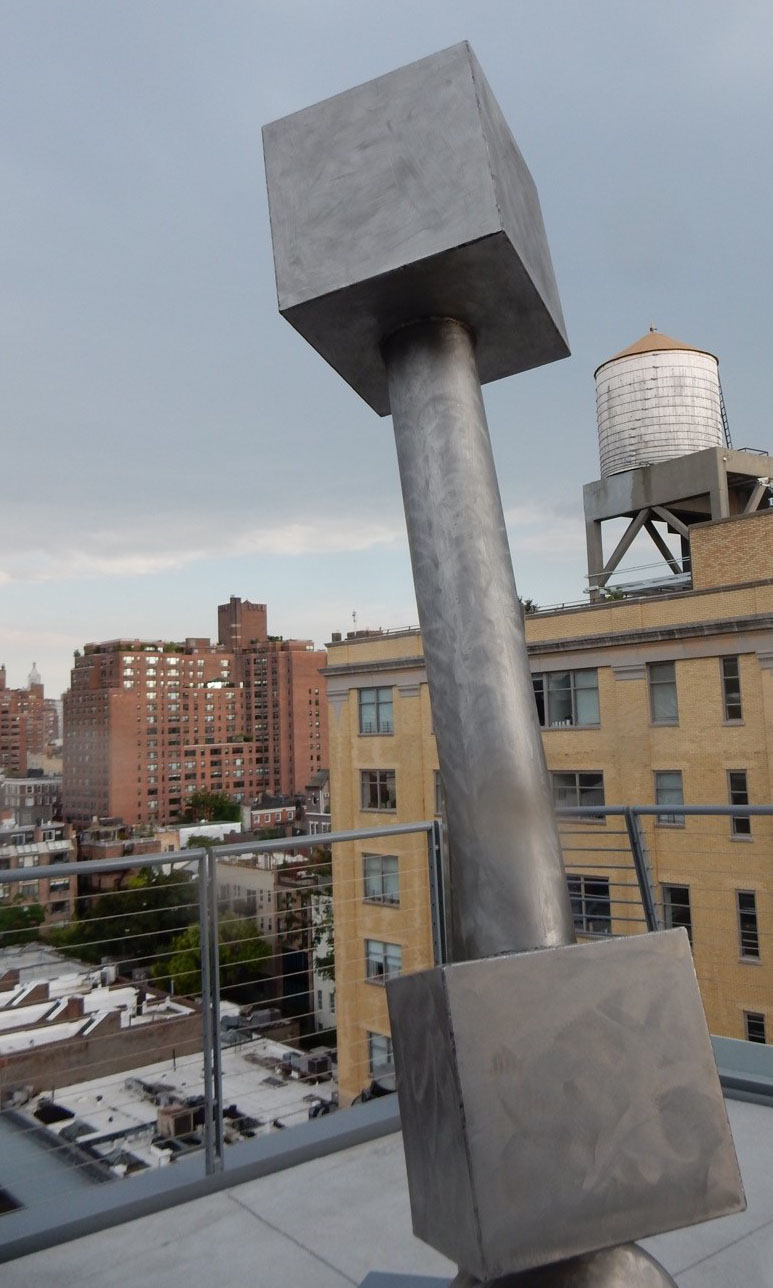 On the terrace at the Whitney, September 2015

On a recent trip to New York, I visited the new Whitney Museum of American Art. The museum recently moved from Manhattan’s Upper East Side to large new premises in the Meatpacking District overlooking the Hudson River. It opened in May with a suitably ambitious exhibition entitled ‘America is Hard to See’ (a phrase borrowed from a 1951 meditation on Columbus by Robert Frost). As one of the curators explained, the exhibition does not claim to offer a ‘comprehensive history’ of American art so much as ‘a series of provocative thematic chapters’.  The concluding chapter, ‘Course of Empire’, takes its title from a series of works by Ed Ruscha (from 2005), which in turn alludes to Thomas Cole’s 1833-36 series, The Course of Empire, the title of which comes from the opening line of a 1729 poem by Bishop George Berkeley.

Allusion accrues and intensifies in the exhibition’s final chapter; not least in Glenn Ligon’s Rückenfigur (2009). The work is steeped in art history –from signage and minimalist neon sculpture to the ancient convention of the figure seen from behind whose perspective the viewer is invited to share.  A famous example is Caspar David Friedrich‘s Der Wanderer über dem Nebelmeer (1818); wanderer above the sea of fog. 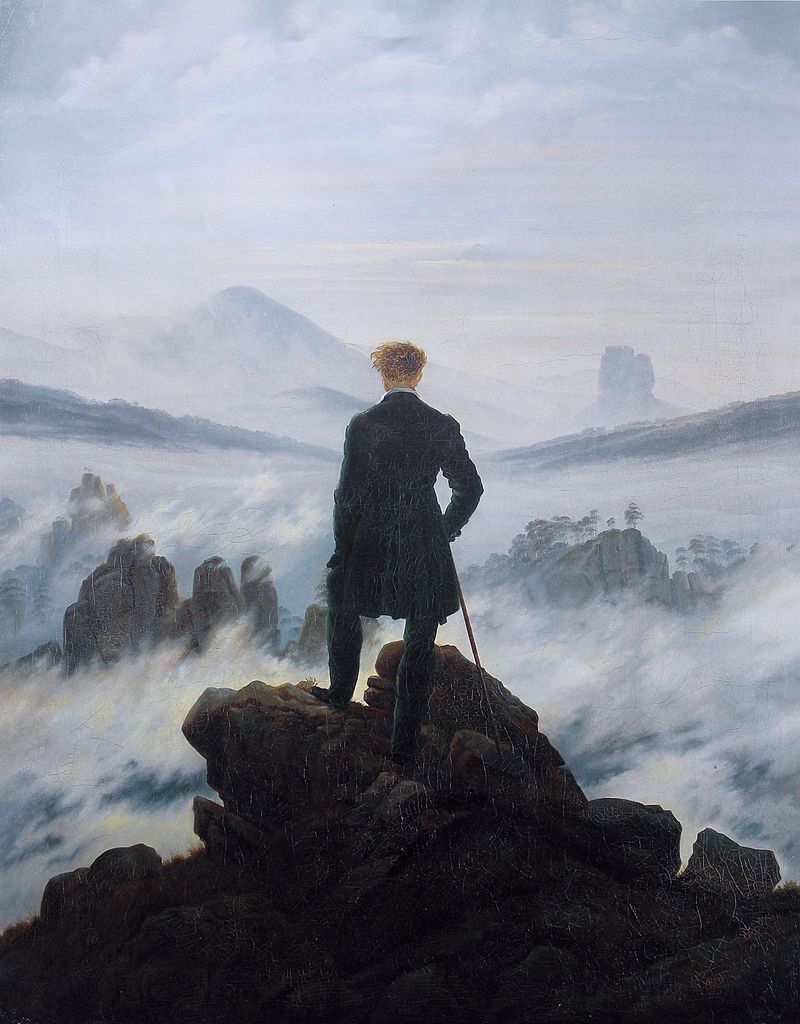 Here the rückenfigur seems to be the sign itself  – we see its wires hanging down  –  and what it looks at is a bare wall. Has America come to a dead end? Is there no future?  But look again and you notice that the rückenfigur-effect is not quite right. The letters don’t proceed from right to left, as they would do if seen from behind, but from left to right. In other words, as Ligon points out, ‘the word faces you and turns away from you at the same time.’ The effect is made possible by the fact that the letters ‘A’,  ‘M’ and ‘I’ are symmetrical.

‘And that’s one of the really interesting things about this piece,’ says the curator Scott Rothkopf, ‘this idea of America, this country, this word facing away from us but at the same time addressing us. …You see the fragile connections between these letters, which I think suggests the sense of America, this country, as a confederacy that’s both united and sometimes divided. And I think that all of those things, in a way, function metaphorically for where this country is at this moment.’

Rückenfigur is part of an (ongoing?) series of neons that riff on national symbolism. The first, from 2006  –  now on show at the Tate –  had the neon painted black and intermittently turn off. Ligon described it as a response to the idea ‘that America, for all its dark deeds, is still this shining light. That’s how the piece came about, because I was thinking about Dickens’s “the best of times, the worst of times.” Yes, that’s where America is. We can elect Barack Obama, and we’re still torturing people in prisons in Cuba.’

As the series progresses, the shining light is getting harder to see. The most recent addition, exhibited in Los Angeles earlier this year, features two neon Americas face down on the floor There’s no more foggy ambiguity here; no more pleasure in the wandering processes of our own perception. Instead, I am reminded of the final painting in Cole’s series – Desolation. 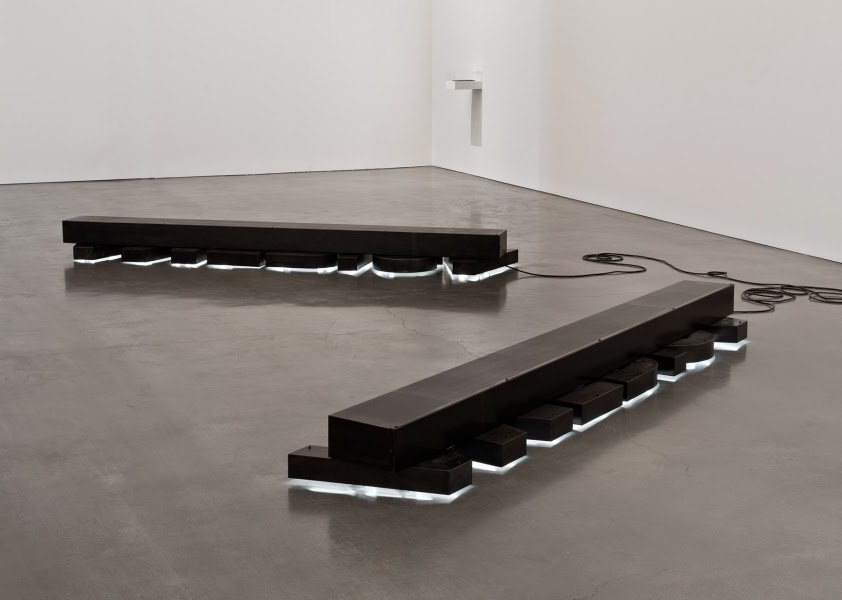 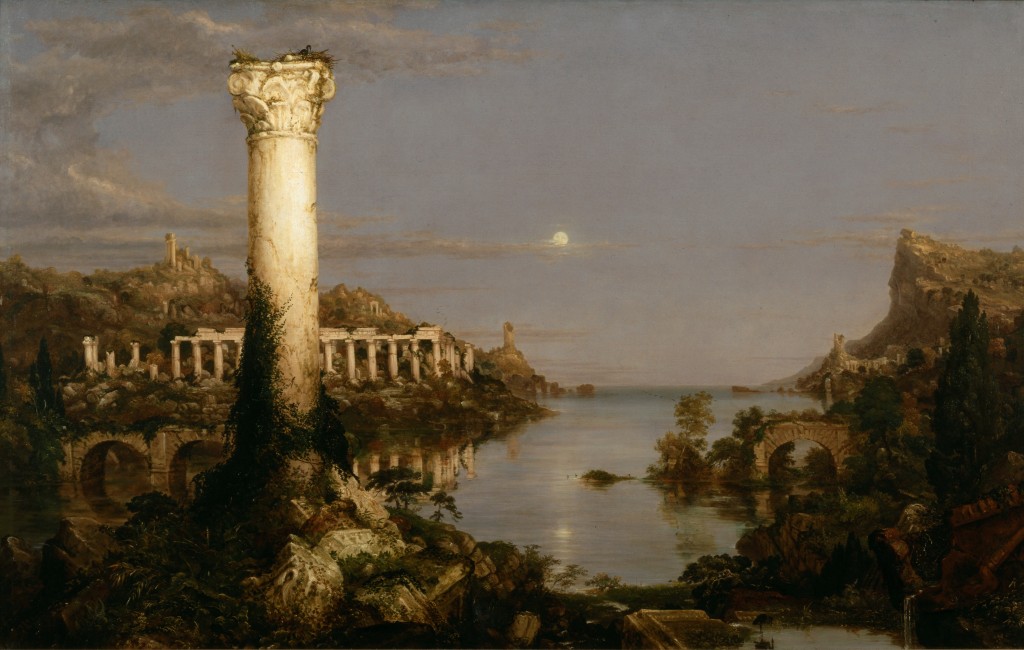 The Network of American Periodical Studies (NAPS) is a new research initiative that aims to bring together scholars working on American periodicals (magazines, newspapers and other periodical publications) from any historical period.

The first NAPS symposium seeks to explore and debate some of the theoretical, methodological and practical implications of the rise of periodical studies for American Studies. We welcome papers on the publication, production, dissemination and reception of American periodicals from the colonial to the contemporary periods and we encourage colleagues to reflect on how periodical studies might provide new ways of thinking about and interpreting the cultural history of the Americas. To what extent, for instance, does the study of periodicals challenge the boundaries circumscribing ‘America’ as a nation? What is the role of the American periodical in the public sphere and how has it changed? How do periodicals map the spaces of America? In what ways do periodicals reinforce and/or transgress the divide between literature and journalism? How does the material history of print culture offer alternative ways of reading and interpreting the complex and often contradictory identities of America? What is the impact of digitization on research into American periodical studies and to what extent does the study of periodicals offer new pedagogic opportunities for American Studies?

Included in the day’s activities will be a workshop on the British Library’s American periodicals holdings, an invited plenary lecture as well as lunch and a wine reception. In addition and as an option for those not wishing to give a presentation, there will be an informal research forum providing the opportunity for scholars to give a five minute summary of their research.

Abstracts of 250-300 words are invited for twenty minute papers by October 31st, 2015. Please send to: Victoria.Bazin@northumbria.ac.uk .

Should you wish to present a summary of your research in the research forum please submit a title by October 31st, 2015 to: Victoria.Bazin@northumbria.ac.uk