When asked about the role of note-taking in his compositional practice in 1839 edition of The Knickerbocker Magazine, a young Charles Dickens asserted:

I never commit thoughts to paper until I am obliged to write, being better able to keep them in regular order on different shelves of my brain, ready ticketed and labelled to be brought out when I want them.[1]

In this case, the mythology doesn’t seem to stack up to the material. Examining the handwritten culture at the heart of Charles Dickens’s compositional practice pulls the researcher in many directions. In what material evidence we have remaining, we do not find ‘regular order’, the ‘ready ticketed and labelled’ shelving system of the brain, artfully and systematically laid bare on paper.  Oftentimes, rather than fullness, one finds fragments, rather than surety, one finds scribbles. 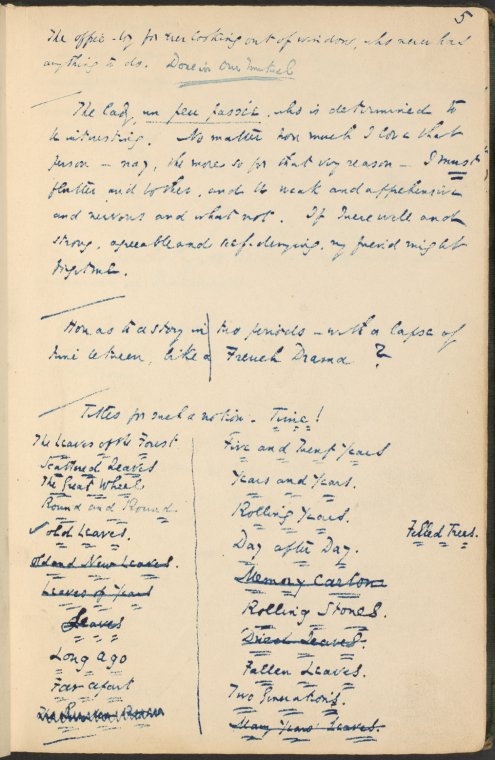 Whilst there are many complex processes at work in Dickens’s note-taking practices, here I address these habits of composition through one document of particular interest: Dickens’s Book of Memoranda. The notebook consists of a rather unassuming looking 5×7 inch cloth bound volume of 176 leaves of off-white paper entitled simply, ‘Memoranda’.  Contained within its leaves we see notes in variegated forms, collected and jotted down for safe-keeping. The medleys of material amassed in ‘various tissues and textures’ within its pages include vast lists of ‘General Titles’ for potential future works, character names, snippets of dialogue and a tiny advertisement entitled ‘EDUCATION for LITTLE CHILDREN’ cut out and pasted in from The Times.[2] The eclectic nature of this notebook, accompanied by its long lifespan (begun in January 1855 and used until Dickens’s death in 1870), attests to the complex compositional practices which aided the creation of his novels.

As its miscellaneous contents suggest, order appears absent in the Book of Memoranda. No titles head the page (other than the opening ‘Mems’) and the entries are not numbered or dated. The lack of obvious organisational structure in the notebook allows for fluid (and potentially wasteful) thoughts to be recorded. For example, on the recto of the second leaf of the notebook, amongst many other notes, Dickens sketches out a possible tale: ‘Beginning with the breaking up of a large party of guests in a country house’ (2r,7). The note continues on the verso of the first leaf of the notebook with an editorial alteration: ‘OR, beginning with a house; abandoned by a family fallen into reduced circumstances’ (1v,7).  Dickens is writing backwards, recto to verso. The unpredictable fluidity of text in the Book of Memoranda speaks of playful possibility. Neither of the stories suggested is ever written by Dickens, yet the form of the Book of Memoranda does not demand that the story-weaver elucidates ‘the relation of its finer threads to the whole pattern’.[3]

Dickens did have other material aids that were more purposeful and ordered and didn’t allow for such fluid practice. The number plans, consisting of a single 7×9 inch loose sheet of blue foolscap paper for each serialised number folded in half horizontally, which Dickens made for each of his novels from 1846’s Dombey and Son onwards are a prime example of this other kind of notetaking central to his compositional practice. Headed by the novel’s title, the number of the plan and listing the titles of the chapters, on the right-hand side, with further annotations indicating story development on the left, the number plans illustrate the ways which Dickens had to plan in order to adhere to the rigid and finely tuned serialisation strategy he had established for the majority of his novels: a monthly serial, in 20 parts (the final being a double number), consisting of thirty-two pages per number. Editing his prose into this kind of shape required the highly systematised planning we encounter in the number plans. Whilst some of the features of the Book of Memoranda can be found in the number plans – deletion and addition of text, fragments that trail off, unused notes – the purpose of both documents differs wildly. Unlike the functional nature of the number plans, the accumulated imaginative scraps as found in the Book of Memoranda existed without being liable to the commercial pressures or the material restrictions of the serial form. Instead the thoughts help in this repository of memoranda were able to be one thing ‘OR’ another, used at a later date ‘OR’ discarded altogether.

Thus in content and in form, the Book of Memoranda sees Dickens embracing the creative possibilities of making mess. From this messy mound, the first textual fragments of many of Dickens’s best known works emerged. Here, I focus on Our Mutual Friend, a novel with waste matter – how it can be contained and controlled – at its heart. It is a novel ever-conscious of the ways in which excess material can accumulate, spread and create mess. We think of ‘the sawdust whir[ling] about the sawpit’ of London’s streets, there is similarly this air of uncontained matter, this whirling disorder at the heart of the medley of material that makes up the Book of Memoranda.[4] We see the foundations of Our Mutual Friend emerge throughout the notebook, recorded at sporadic intervals: the title first appears amongst a list of ‘General Titles’ in 1855 and the sketch of a plot surrounding ‘A man- young and eccentric?-feigns to be dead’ is described as a ‘LEADING INCIDENT FOR A STORY’ in an 1862 note (92,19). As the differing colours of ink in the manuscript indicate, Dickens’s pen returned over the course of a number of years to correct, refine, recycle and rework the material he had deposited there. In the process of returning to these multifarious notes for compositional inspiration, Dickens’s annotations point to the tension between fluid thought and the need to contain and organise it. As David Trotter notes ‘it would indeed be foolish to ignore [Dickens’s] playfulness. But that playfulness is grounded in the twin anxieties […] a worry about waste […] and about mess’.[5]

Dickens returns to the Book of Memoranda across the span of several decades to itemise and order the heap of ideas he has allowed to ‘playful[ly]’accumulate. Using darker blue ink (as done when revisiting the number plans he made for the novel) he places ticks next to entries that have been used in his works and draws bold vertical lines through them. He also annotates these entries, with a reminder that the material has been used: ‘Found Drowned. The descriptive bill upon the wall, by the waterside [Done in Our Mutual]’ (36, 8).  Dickens thus becomes his own interlocutor, draws himself into dialogue with his own old and new ideas. This practice of editing in the Book of Memoranda closes the potential imaginative spaces that the strands and scraps of plot he notes down can inhabit. When the space of the page is slashed and ticked with fresh ink, the notes become ‘ticketed and labelled’ and thus the excess matter bred in composition is managed and contained.

Dickens’s retrospective imposition of a system of organisation onto a notebook consisting of amorphous, spontaneous thoughts reveals that ‘the twin anxieties’ of leaving waste and excess matter are never absent, even in the most fluid seeming note-taking practices. Occurring within the private space of his notes, these revisions and alterations do not simply express an anxiety about being caught in the act of messy composition. This impulse to redraft and create systems of organisation within the memoranda reveals a compositional practice motivated by the belief that the public mythology might be able to translate to private material practice; page space might be able to reflect the ‘regular order’ of internal shelf space; ‘ticket[ing] and labell[ing]’ disordered thoughts might clear the ground for fragments and scraps of text to be creatively repurposed. Thus, from the constant reworking and reorganising, ‘sorting and sifting’, of his notes Dickens’s novel emerges: the ‘gold dust of the Golden Dustman’, dug out and redeemed from the fragmented heap (Our Mutual Friend, p.301, 209).

Research conducted as part of the M.Phil. in English Studies: Modern and Contemporary, Faculty of English, University of Cambridge.