Cambridge University Library, MS Ee. 4. 30 is a copy of Walter Hilton’s contemplative treatise The Scale of Perfection. Dating from the late fifteenth century, the manuscript is a good quality production by a single scribe, with some careful decorations. It was produced in the London Charterhouse, a major centre of book production and circulation. 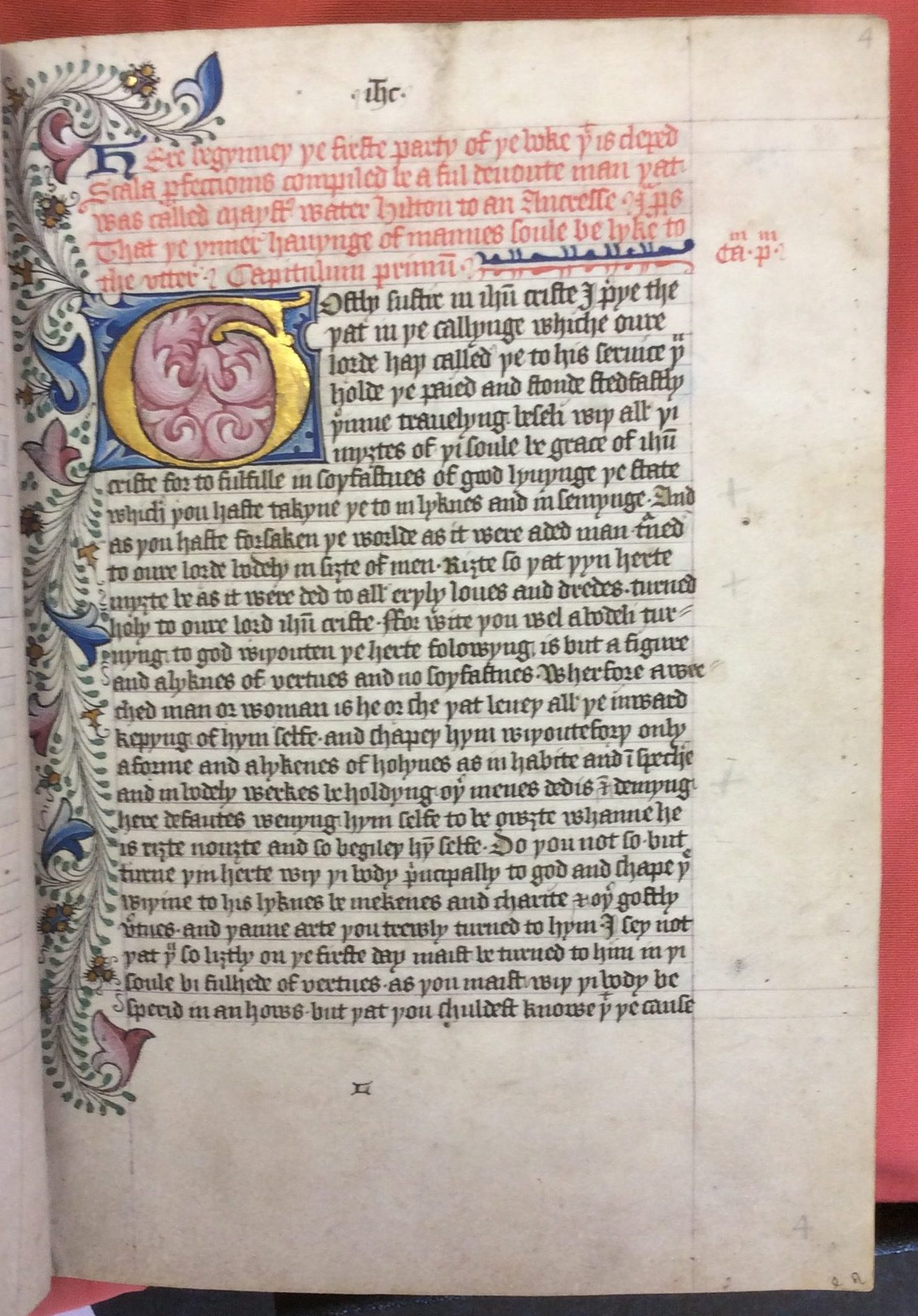 Indeed, the presence of an ex libris inscription in the manuscript indicates its provenance, one which follows the standard Latin phrasing from this house: ‘Liber domus salutacionis Matris Dei ordinis cartusiensis prope London’ (‘a book of the house of the Salutation of the Mother of God, of the Carthusian Order, near London’). This formulation appears in several other volumes from the Charterhouse, including at the very end of Cambridge University Library, MS Ff. 1. 19 (fol. 134v), where it is heavily abbreviated. However, in MS Ee. 4. 30 the formulation appears in an unusual and, as far as I have been able to determine, unique format. The inscription appears one letter at a time in the central lower margins of each recto in Part One of the Scale text (fols. 4r – 62r), meaning that the reader has to decipher the text gradually.

The letters in Lombardic Capital are very similar to other litterae notabiliores in the manuscript, suggesting that they were inserted by the same scribe who produced the text. The number of letters in the inscription appears to have been intentionally fitted to the length of Part One only, as the symbol used to denote spaces between words (an obelus with two dashes) is sometimes inserted beside a letter and sometimes on a folio of its own. Moreover, prope is abbreviated as ppe.

As I have not identified other examples, it is difficult to say why the manuscript features this cryptogrammic technique. Indeed, it may have been a one-time experiment on the part of the scribe. Given that Carthusian monks lived and worked mainly alone, this could also be seen as a joke between scribes. Alternatively, Professor Richard Beadle has suggested that the format could be a security measure: an ex libris inserted one letter at a time is much harder to excise than one at the end of a colophon or at the foot of a title page. A hidden ex libris may have shown the codex’s Charterhouse origin in an unobstrusive way, allowing for it to be circulated to other religious houses or the laity without an obvious Carthusian identity. A survey of Carthusian books, particularly those associated with the London charterhouse, may shed some light on this issue.

Research conducted as part of the Textual and Related Studies component of the MPhil in Medieval and Renaissance Literature.