Cambridge, University Library, MS Ff. 5. 35 contains The Travels of Sir John Mandeville and Piers Plowman. Both works were copied by a single scribe, and are relatively uniform in terms of layout, decoration, abbreviation, and use of catchwords. These two texts are also found in close proximity in several other manuscripts (Cambridge University Library Dd. 1. 17 and San Marino, Calif., Huntington Library MS HM 114), suggesting that despite differences in genre, form and style, the combination was a somewhat popular and apparently logical one for medieval audiences.

This manuscript features two separate sets of quire markings: a series of quire numbers, likely made by a later binder, loosely resembling Roman numerals; and a series of leaf signatures, apparently scribal, visible on the bottom outer corner of the recto of the first folios of many quires, consisting of a letter marking the quire number and a Roman numeral indicating the number of the folio within that quire.

Many of these are trimmed or illegible, but it is possible to reconstruct their original sequence by looking at those that remain (see table below). This sequence indicates that each of the two texts within this codex was given independent leaf signatures by the scribe, commencing on the second quire of each text with the signature ‘a I’ (it was not uncommon for scribes to leave the first quire of a new sequence unsigned).[1]

The presence of distinct sequences of signatures is often associated with the compilation of manuscripts from originally discrete, self-contained segments, as in booklet or fascicular production.[2] Yet, an explanation such as this would not fully account for the situation which occurs in MS Ff. 5. 35, since the two texts do not exist in fully independent, free-standing units, as we would ordinarily expect in the case of booklet production — the very final lines of The Travels of Sir John Mandeville are copied onto the first folio (49r) of Quire 7, with Piers Plowman commencing overleaf. In fact, there is even a catchword on the final leaf of Quire 6 (f. 48v), linking it to the following quire. 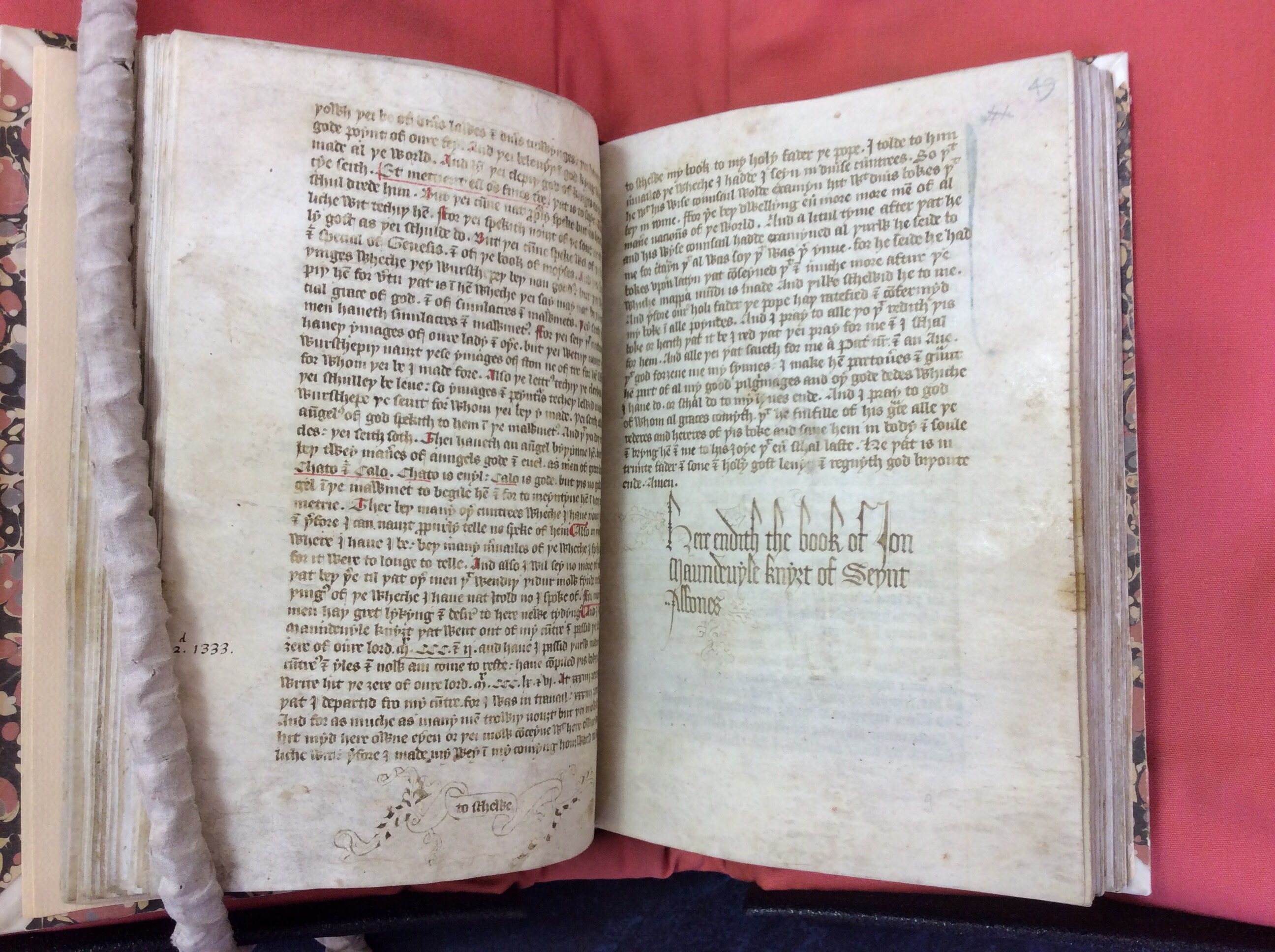 One possible explanation for this somewhat idiosyncratic situation might be that the scribe initially began copying the two texts independently, leaving the first leaf of the quire beginning Piers Plowman blank as a protective cover,[3] and only deciding at a later point to use this space to finish Manderville, upon finding that it was overrunning its final quire. As Ralph Hanna notes, ‘larger booklets can be integrated or joined in ways which obscure the original separateness of their production’.[4] Other explanations may be possible, however, perhaps relating to the construction of the exemplars from which these texts were copied, or the scribe’s access to them. The construction of MS Ff. 5. 35, in any case, with its separate quire signatures yet not fully discrete textual units, points towards a need for a better understanding of scribal practices concerning leaf signatures.

* There is a mark on the bottom of 49r which looks like it could be a cropped ‘+’ sign — however, it does not appear to be written in the same orange/brown crayon as the other binder’s marks, and may have been made independently to indicate the beginning of the quire in which Piers Plowman commences.

[1] For the purposes of this argument, I count Quire 7 as the first quire of Piers Plowman, which begins upon the verso of the first folio of this quire.

[2] P. R. Robinson, ‘The “Booklet”, a Self-Contained Unit in Composite Manuscripts’ in Codicologica (1980), 46–69 (p. 48). See also Ralph Hanna III, ‘Booklets in Medieval Manuscripts: Further Considerations’ in Studies in Bibliography, 39 (1986), 100–111. Hanna finds this feature the ‘most persuasive, indeed practically definitive’ of all Robinson’s criteria for booklet production, writing that ‘independent systems of signatures in different parts of a manuscript, even in a codex written by a single scribe, if the scribe is careful, argue strenuously for production as units conceived as independent’ (p. 111).

[3] On the use of protective blank leaves at the beginning of texts, see G. S. Ivy, ‘The Bibliography of the Manuscript Book’ in The English Library before 1700: Studies in its history ed. by Francis Wormald and C. E. Wright (London: University of London, The Athlone Press, 1958), p. 51.

Research conducted as part of the Textual and Related Studies component of the MPhil in Medieval and Renaissance Literature.