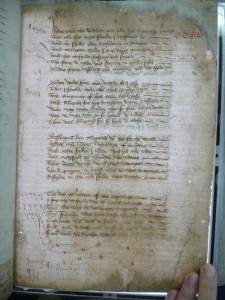 The ‘Mapping Medieval Paper in England’ Project was funded by a Cambridge Humanities Research Grants Scheme 2014/15 with the aim of preparing a new dataset of Medieval Paper Manuscripts written in England between 1300 to about 1500 to consolidate the data that Dr Da Rold has collected to date.

The team gathered to date evidence from 5841 manuscripts of which at least 736 are written on paper. The fields, which we have chosen to populate the database, include manuscripts’ shelf-marks, localization, content, date, language, material and name of the scribe if known. The picture that the database provides highlights the paucity of extant research and records the need for further exploration of English paper manuscripts. However, it also reflects established links between paper stocks, production, dissemination and use, which must be explored and analysed in more detail.

This information will form the basis for future funding applications. Should they be successful, they would allow us to shed new light on the significance of paper in the rapidly developing societies of the later middle ages and the ways in which books and documents were produced and used. However, the database in itself is a valuable resource. We hope to be able to make this database available in due course, as we believe that the publication of the database would be invaluable for scholars working on a myriad of projects associated with texts, manuscripts, materiality and social networks in the later middle ages.